Share All sharing options for: LaQuan Williams: One Year Later

A year ago, Baltimore Ravens WR LaQuan Williams was an undrafted and unknown rookie fighting long odds to make the roster of his hometown Baltimore Ravens. After an unremarkable collegiate football career at the University of Maryland, Williams did not get drafted in the 2011 NFL Draft and went home to East Baltimore to contemplate a possible future without football.

He stayed in shape, hoping for that phone call from one, any NFL team, for a chance to show what he could do. Not only did he get that call and chance, it was from his favorite team, and the rest is history, at least so far. Williams made the Ravens 53-man roster with a strong Training Camp last summer, bolstered by his versatility and play on Special Teams.

Now he is headed into his second year and sees the other rookies, drafted and undrafted, in the exact same spot he was only a short year ago. Mind you, LaQuan is not guaranteed a spot this season and will continue to show the effort and desire that opened the eyes of his coaches and got him to where he is in the first place.

Baltimore Beatdown got a few minutes with LaQuan to remind him of our conversation last year and what he sees in this year's crop of unknowns that he could lend his experience to helping them adjust and make the most of their chances.

(Read the interview with LaQuan Williams after the 'Jump') 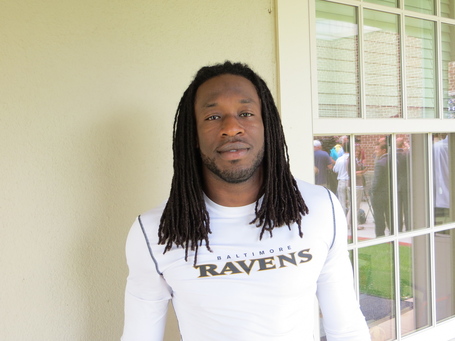 Baltimore Beatdown (BB): LaQuan, a year ago we stood here and talked about when you were not drafted and were sitting at home and the telephone rang, and of course you were staying in shape hoping to get a call from any NFL team and it was the Baltimore Ravens. You talked about how excited you were. I think you said you dropped to your knees crying, then called your Mom and Dad before calling Torrey (Smith).

BB: Okay, here we are, year two. You're on the team. Once again you're fighting for a roster spot, but you now see lots of other guys coming in here, the same way you did. What's the difference in your feelings?

LW: As far as me, I still feel like I got to prove myself, so I come out every day and just work as hard as I can to make every play that I can. Me having a chance to have an off-season is really helping me out, slowing the game down a lot for me. I'm mentally way far advanced than I was last year so that's going to help me out a lot.

BB: You see some of the rookies in here and you probably had guys helping you, pointing things out to you. What are you offering to them, both physically on the field showing them what to do but also how to survive in a pro locker room?

LW: The same wisdom, man. I had guys helping me out, pushing me, showing me what I should do and how to help me do stuff there, so I'm going to do the same thing for the young guys and I've done that since they got here.

BB: Once again, with the team picking up Jacoby Jones and of course Torrey and Anquan (Boldin) being here, you're going to have to earn your way on board, not only on the practice field, but also when you're playing on Special Teams. What do you feel you need to do in order to retain a roster spot on this team?

LW: Well, like you say, Special Teams is the key for me. I feel I need to stand out this year on Special Teams. I want to be one of the top guys on Special Teams on this team. I'm going to let the role as wide receiver play out as it plays. I'm certainly going to put my all into all that and see how it works out.

BB: I asked you at the end of our interview last year about how you felt guys wearing the dreadlocks being the best players in the league (LaQuan laughs) and you said it provided some padding in your helmet.

BB: But here you are, a year out of nowhere, basically a long-shot to make the team. Gotta admit, there's got to be something about that dreadlocks theory?

LW: Um, I'm not sure. I just know it keeps my cushion, man, and I'm not letting it go until after football.

BB: Right, I appreciate that. Thanks and good luck, LaQuan.