The Baltimore Ravens finished up their final OTA prior to mini-camps beginning next week, and Baltimore Beatdown was in attendance to take in the action. What's the difference between the OTA's and mini-camps you ask? Not much, other than the voluntary vs. mandatory requirements, which is actually a huge difference.

Lots of starting veterans were absent for most, if not all of the previous practices, and while that meant a ton of valuable reps for the backups and rookies, when the vets report, it pretty much means back on the sidelines for many of these guys. They'll still get reps with the second and third teams, but the drop-off will be noticeable for them.

That's why these past few sessions were like gold to the guys who are fighting for roster spots, not just the draft picks and returning backups, but the undrafted rookies as well. Some stood out recently and that will definitely help their chances.

The defense, regardless of who is here or not, continues to yap at the offense, being the more vocal side of the line of scrimmage. When CB Danny Gorrer broke up a Joe Flacco pass intended for WR Jacoby Jones, the hooting and hollering commenced. With the absence of both starters at inside linebacker, that meant good practices for Dannell Ellerbe and Josh Bynes, who seemed to know exactly what to do in the absence of Ray Lewis and Jameel McClain.

There was some hard hitting, not exactly preferred by head coach John Harbaugh, who rushed in once to counsel the guys about the need to take it easy in these practices. Some nice throws, catches, defensive plays, including a sweet scramble by backup QB Tyrod Taylor, who beat Sergio Kindle to the edge and turned upfield for a long gain.

One guy who had it rough was undrafted rookie QB John Brantley (Florida), who threw interceptions on at least two consecutive passes, perhaps even three, before finally connecting on one completion.

The kicking game was on display a bit, with Billy Cundiff nailing a of his attempts that I witnessed, including a 50-yarder. Rookie competition is coming from Justin Tucker (Texas) who also hit a 50-yard FG. 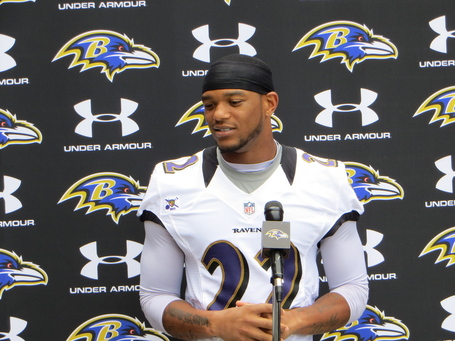 After practice, Harbaugh took the podium, lauding the efforts of both Flacco and CB Jimmy Smith, who was waiting in the wings to speak to the media next. Rookie OG Kelechi Osemele took the podium next. 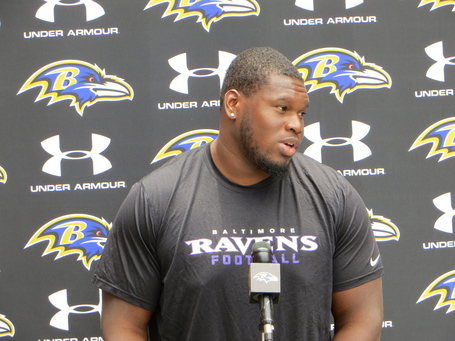 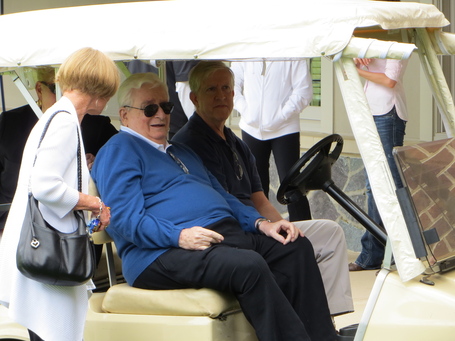 I had a few moments for an exclusive interview with 2nd year WR LaQuan Williams, which should post in the next day or so. Stay tuned.