The Baltimore Ravens are in the midst of another one of their mini-camps, this one mandatory for all rookies and veterans. Most of the players were in camp yesterday, although there were a few no-shows, including RB Ray Rice (contract dispute) and Ed Reed (personal reasons). A few other guys were absent due to injuries, but for the most part, the team was present and on the field in the rain all afternoon.

Rookie RB Bernard Pierce was escorted off of the field with a possible injury, although no news is available as of this writing. The team signed veteran free agent center/guard Tony Wragge, who played for the St. Louis Rams last season and provides additional veteran depth on the offensive line.

The rain made it difficult for the media to see what was going on most of the afternoon, but it was obvious it resulted in more poorly thrown passes and a lot of dropped balls by the normally sure-handed receivers. Rookie guard Kelechi Osemele is present but not practicing, leading one to wonder if this has anything to do with the recent signing of both Wragge and last week's Bobbie Williams.

The QB's, RB's, Wr's and TE's took part in a drill when a player grabs a ball tethered by a huge elastic band to the goalpost and has to hold onto it as he stretches it ten yards to one of three cones guided by a coach pointing at the last moment to which cone the player must tap before carefully back-peddling. RB Anthony Allen slipped to the ground and hen released the ball, allowing it to spring back to the goalpost, causing the other players to crack up and resulting in Allen having to go again once more to do it correctly. 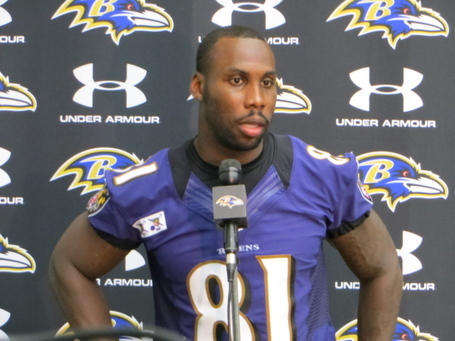 After practice, head coach John Harbaugh gave a brief synopsis and took a few questions, as did WR Anquan Boldin and LB Ray Lewis. On Reed, Harbaugh said, "I have not communicated with Ed. I'm not sure what his situation is." Ray was asked about his off-season workout regimen, to which he replied, "You gotta change with the game." 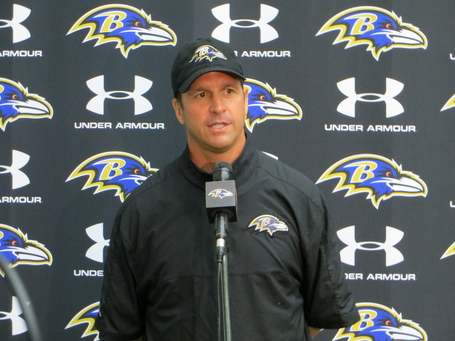