The Effect of Penalties in the NFL

Share All sharing options for: The Effect of Penalties in the NFL

After reading a post Bruce wrote earlier analyzing how replacement referees would affect games, I analyzed the direct effect of penalties on teams in the NFL. In any statistical study in sports you need to at first determine what you are trying to find out. So what was I trying to find out, you ask? Does the amount of penalties a team commits directly affect the team's final record?

Before I jumped to any conclusions, the first thing I looked at was the average amount of penalties a team committed per game in 2011. Keep in mind this study may be a bit sloppy and developmental due to the small sample size, but I digress. The list is as follows (credit goes to teamrankings.com and NFL.com for this information) : 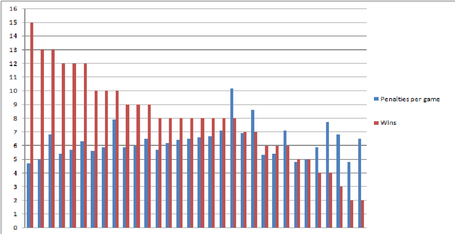 So what does this mean, you ask? Well it simply points towards the direction that (for 2011 anyways) penalties committed didn't affect the team's overall performance. So the next time your team gets flagged for a false start or pass interference, remember that it is not as big of a deal as you think at the moment. That little yellow flag we all groan when we see on the field, is but a speck of sand on the vast shoreline that is our team's final record.