The Baltimore Ravens completed their second full-team OTA in the past two weeks yesterday and while it is considered a voluntary mini-camp, a significant number of veterans were there to practice with the rookies. Guys such as Ray Lewis, Ed Reed, Haloti Ngata, Ray Rice, Terrell Suggs, Anquan Boldin, Jimmy Smith, Bernard Pollard, Bryant McKinnie, Marshal Yanda, and Vonta Leach were not there, but those guys all either had an excuse or are professional enough to give you the confidence that they will ultimately be there and in great shape as well.

The ones that were there took part in fast moving drills, with coaches leading and calling out tips and motivational comments, some of which will not be allowed to print in the public's eyes. It was good to see veteran center Matt Birk there, as he is like another coach for the younger guys on the offensive line.

Defensive tackles Arthur Jones and Terrence Cody filled the middle of the defensive line and inside linebackers Jameel McClain and Dannell Ellerbe put guys in their assigned spots like seasoned vets. Lardarius Webb laughed and joked with the other defensive backs trying to fight to win jobs along with the other starters. Cary Williams was in attendance but not practicing due to his hip surgery, although he was seen running in the end zone at one point.

(More notes and photos on yesterday's Ravens OTA after the 'Jump')

The offensive line was anchored by Michael Oher on the left side and Ramon Harewood on the right side. When rookie Gino Gradkowski wasn't spelling Birk at center, he was taking snaps at both left and right guard. OLB Michael McAdoo was there, looking tall and thin, but played with his hand in the dirt on scrimmage drills. However, he also spent a lot of time on the sideline watching, making one wonder if he is truly expected to make any impact in 2012.

OLB Sergio Kindle played a lot, mostly with the second team and still looks like a proto-typical linebacker with a near-perfect physique. However, with Paul Kruger and Courtney Upshaw taking reps with the first team and expected to start along with Albert McClellan, don't expect too much from the third-year guy who just can't seem to get a break or crack the starting lineup.

WR Jacoby Jones seems to be getting a lot of looks from QB Joe Flacco, who apparently is trying to develop that chemistry. With Anquan Boldin not here, both Jones and Torrey Smith are getting the most resp. However, LaQuan Williams gets a lot of attention fro Flacco, making some real nice grabs and compliments from the coaching staff for his solid play yesterday. 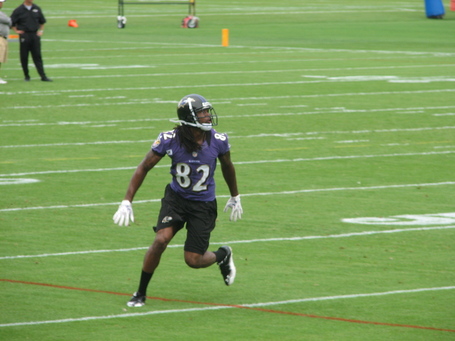 Tight ends Ed Dickson and Dennis Pitta might be fighting to get an advantage on each other for more playing time, but you wouldn't know it by the way they seem to be best friends both on and off the field. They always are high-fiving each other and stand together on the sidelines in those rare moments one or both are not on the field.

Rookie safety Christian Thompson picked off a Flacco passs and then lateraled it to teammate Chykie Brown, drawing criticism from coaches to "hold onto that ball," but teasing from the offensive side, "that ain't no Ed Reed sh*t!"

Rookie placekicker Justin Tucker is here and veteran Billy Cundiff is too but other than a few extra points and short field goals, they are only seen practicing on the far field. Tucker seems to have the stronger leg but one still has to wonder how legit the competition will be or is Tucker just in camp to push Billy to get back to his 2010 form after and pretty poor 2011 season.

More to follow next week as the team has another OTA scheduled for Wednesday and Baltimore Beatdown will once again be there to bring you the action and photos.