The Baltimore Ravens held one of their alloted 'Offseason Training Assignments' (OTA's) this week and it resulted in excellent attendance from a majority of veterans as well as the rookies. Noticeable no-shows included Ray Rice, Ray Lewis, Ed Reed, Haloti Ngata, Matt Birk and of course Terrell Suggs. However, their absence gave additional valuable reps to guys who otherwise might have been forced to run with the second or third teams, or even just stand around and watch.

Baltimore Beatdown was there to take in the action and tight off the bat the loudest voice heard all day came from strong safety Bernard Pollard. Pollard was not just trashing the offense after defensive stops, but also providing valuable leadership in explaining schemes, positioning and assignments to the others.

On the offense, QB Joe Flacco took control every time he stepped up under center. In Rice's place with the first team, was 2nd year RB Anthony Allen. He was followed in the rotation by Damien Berry and then rookie Bernard Pierce. Anquan Boldin and Torrey Smith were the receiving duo, but newcomer Jacoby Jones joined in and caught his share of Flacco rockets.

Rookie Kelechi Osemele played left guard next to the massive Bryant McKinnie, who still towered over the huge rookie. When Michael Oher wasn't manning the right tackle position, Jah Reid filled in and did so pretty well. Twice I saw OLB Sergio Kindle blitz in off his edge only to have him stood up and kept out of the way from Joe Flacco.

Flacco seemed on target most of the day, with tight end Ed Dickson getting a lot of his looks. Defensively, CB Chykie Brown shined, picking off more than one Flacco pass and covering his man like a blanket all day. Jimmy Smith went up against Torrey Smith a lot, with both seeming to enjoy the challenge, knowing this will be a routine occurrence over the next few years at least.

Art Modell is watching practice from the comfort of a golf cart.

O.J. Brigance is in his customary spot overseeing practice as he so often does.

New Defensive Coordinator Dean Pees is teaching a lecturing the players on the schemes and positioning.

After practice, head coach John Harbaugh took to the podium and his comments were posted on BaltimoreRavens.com. Joe Flacco was next and he said he was excited to get going with new receiver Jacoby Jones, and felt that the fact that Ray Rice was not there was no big deal, answering ESPN's Sal Paolantonio's question with a retort, including reminding him the Ravens had no OTA's last year and still went to the AFC Championship Game. 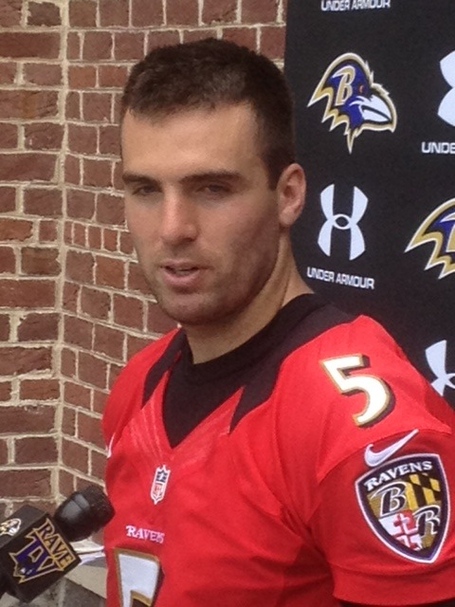