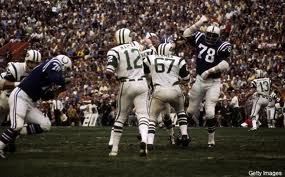 Since the winner of the Masters Golf Championship is named Bubba Watson, the crew over at the NFL Network decided to do a list of the Top Five Bubba's In NFL History. There haven't been a ton of 'Bubba's' over the league's tenure, but the one at the top of the list should be relatively familiar to the older Baltimore football fans.

From #5 (Green Bay Packers TE Bubba Franks) down to the others on the list, no one player exemplifies the name, 'Bubba,' more than Pro Football Hall of Fame Baltimore Colts defensive end, Bubba Smith. Smith was the first overall pick in the 1967 NFL Draft and then went on to terrorize quarterbacks for nine NFL seasons. He only played in Baltimore through the 1971 season, then finished out his career with stints with the Oakland Raiders and Houston Oilers.

Smith was never the same player after a devastating knee injury in a 1972 pre-season game, when he fell onto a yard-marker pole on the sidelines. He is more recently known for his acting roles, especially on the hit series of "Police Academy" movies. Unfortunately, Bubba Smith passed away last year at the age of 66.