Share All sharing options for: NFL, Ravens Getting New Nike Uniforms In 2012

The NFL has signed a new uniform deal with Nike after being with Reebok for so many years. The league will reveal the new uniforms on April 3rd, and while some of the concept photos and drawings released have been rumored to be fakes, the real ones are expected to be a definite change from what we've seen over the past years.

However, the basic logo of each team will not change unless the team decides to do so and the league approves. Therefore, do not expect to see a different Ravens bird head as the team's main logo despite the new look. A story at SB Nation says that after a ten-year relationship with Reebok, Nike's deal will be for five-years and upwards of $35 million dollars per year.

(See another possible new Ravens-designed gloves after the 'Jump')

Ravens fans have grown accustomed to the purple uniforms and many like the blacked-out version they wear on special occasions such as prime-time games. All 32 teams will be getting reworked versions and one of the leaked rumors include that the Jacksonville Jaguars main color will be black in 2012, so if you were hoping for primarily black Ravens uniforms, don't expect them as a primary color on a regular basis. 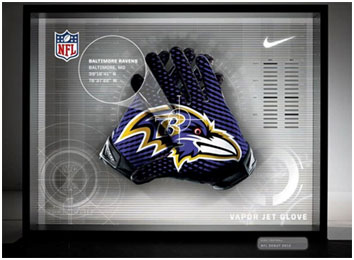