Share All sharing options for: 2000 Ravens In NFL's 'Final Four' 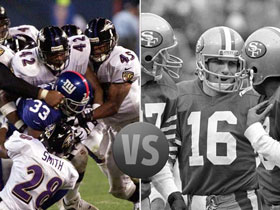 The 2000 Baltimore Ravens have made the 'Final Four' in the competition for the Super Bowl-era Greatest Team of All-Time in NFL Bracketology. Over at NFL.com, the 2000 Ravens will face the 1984 San Francisco 49ers, led by a young Joe Montana and Jerry Rice. The other side of the bracket finds the 1985 Chicago Bears facing the 1976 Oakland Raiders.

The Ravens are the Cinderella team of the foursome, as they were the 9th seed in their bracket in the 64-team tournament. The surprising advancement in the voting by fans is obviously due to the huge respect the voters are giving that defense, which set an NFL-record for fewest points allowed in a 16-game season. Not only dd they only surrender 165 points (10 points/game), but had an unheard of four shutouts during that magical season.

The NFL Network analysts are still not giving the 2000 Ravens any love, as they are not convinced this is a 'Final Four' team and fully expect the Niners to not only defeat the Ravens in this semi-final match-up, but perhaps even destroy them. Do your part as a Ravens fan and head on over to NFL Bracketology and vote for the 2000 Baltimore Ravens. Voting ends Wednesday, March 28th, so go vote now,...early and often!