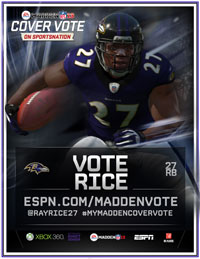 The Madden NFL 13 Cover Vote officially kicked off, after over 4 million fan votes during two weeks of exciting play-in round action. The fans have chosen the elite 32 NFL players who have advanced and will compete for the honor to become the cover athlete of Madden NFL 13.

In the matchup between the Baltimore Ravens' Ray Rice and Terrell Suggs during the play-in round, Rice won the fan vote to advance to the round of 32. Now, the 5th seeded Rice will go head-to-head against 12th seeded A.J. Green of the Bengals during first round voting as he hopes to become the new cover athlete for Madden NFL13.

Today and continuing through April 25, fans can log on to www.ESPN.com/MaddenVote to vote daily for their favorite cover athlete candidate. Every Wednesday throughout the campaign, fans can tune in to ESPN’s SportsNation to see which players advance further in the competition. The tournament will culminate with the reveal of the Madden NFL 13 cover athlete live on ESPN’s SportsNation on April 25.

REDWOOD CITY, Calif., - March 21, 2012 – Electronic Arts Inc. (NASDAQ:EA) and ESPN announced today the 32 fan-selected NFL players who will advance in the EA SPORTS™ Madden NFL 13 Cover Vote. The announcement follows a two week play-in round, during which time fans voted between two teammates in matchups for each NFL team on the SportsNation Facebook page. Today, winners from each matchup moved on to the official cover vote bracket. Fans can vote for their favorite cover athlete candidate from their computer or mobile phones at ESPN.com/MaddenVote through April 25.

To kick off the Madden NFL 13 Cover Vote bracket debate, a SportsNation "Madden Cover Vote Special" will air tonight on ESPN 2 from 6-7 p.m. ET. Every Wednesday throughout the campaign, fans can tune in to SportsNation at 5 p.m. ET for an in-depth discussion about the latest voting results and to see which players have advanced to the next round. The tournament will culminate with the reveal of the Madden NFL 13 cover athlete on SportsNation on April 25, the night before the 2012 NFL Draft.

The results of the Madden NFL 13 Cover Vote play-in round are:

Among the 32 players are past Super Bowl winners including Victor Cruz and Aaron Rodgers; perennial Pro Bowl players Larry Fitzgerald and Drew Brees; and some of the most dominant players in the NFL such as Troy Polamalu and Jared Allen. During the first ever play-in round, fan voting resulted in upsets like LeSean McCoy surpassing Michael Vick who was a finalist in last year’s award-winning Madden NFL 12 Cover Vote competition.

"Every football fan has an opinion on who should be on the Madden NFL cover, which was highly visible given the overwhelming response and debate that ensued during last year’s campaign. We’re proud to once again put the fate of the game’s cover in our fans’ hands and let them decide who is worthy of becoming the Madden NFL 13 cover athlete," said director of marketing Anthony Stevenson. "Our collaboration with ESPN and SportsNation helped elevate the campaign to new heights last year and we’re thrilled to team up again on this award-winning program."

"Sports fans are embracing the new structure of the Madden NFL 13 cover vote and the response has been tremendous for the play-in round, which gives each team’s fans an increased voice in the player selected for the vote," said Jamie Horowitz, Vice President, Original Programming and Production, ESPN. "SportsNation has the most engaged social audience across the ESPN network, and enabling them to share their votes across Facebook was an ideal way to tap into some of football’s most passionate fans."

The Madden NFL 13 cover vote marks the third-consecutive year that EA SPORTS has asked fans to help shape the face of the Madden NFL franchise through a cover athlete voting campaign. It also marks the second year of its collaboration with ESPN and SportsNation. Last year, nearly 13 million votes were logged through ESPNSportsNation.com online and via the mobile web, the most ever for an ESPN cross-platform activation, which witnessed 10thseeded Peyton Hillis (Browns, RB) winning the honor to grace the cover of Madden NFL 12.

To ensure their favorite player advances to the next round of this year’s competition, fans are encouraged to vote daily and tweet their picks using #MyMaddenCoverVote on Twitter. Beginning March 22 at 9:00 a.m. ET, fans can also visit the Madden NFL Facebook page to fill out their own Madden NFL 13 cover athlete bracket to compete against their friends for the chance to win Super Bowl tickets and copies of Madden NFL 13. Visit www.facebook.com/EASPORTSMaddenNFL for Official Rules.

NFL Players Incorporated facilitated all player participation, most notably through the use of a new mobile app developed in partnership with Playmark, Inc. that allows players to quickly and easily record videos to share with their fans online.

Electronic Arts (NASDAQ:EA) is a global leader in digital interactive entertainment. The Company’s game franchises are offered as both packaged goods products and online services delivered through Internet-connected consoles, personal computers, mobile phones and tablets. EA has more than 100 million registered players and operates in 75 countries.

SportsNation is a live sports television show born from the Internet, fueled by fan interaction and focused on fun. The show, which has the youngest and most male audience on the ESPN network, features discussions of the day’s hottest sports topics but also smaller stories that generate buzz on the Web but are overlooked by other shows. Feeding off the theory that if two heads are better than one, 200,000 heads are better than two, SportsNation engages hundreds of thousands of sports fans across the country via ESPN.com’s SportsNation page (http://espn.go.com/sportsnation/).

About ESPN Games and EA

ESPN’s long-standing relationship with EA produces deep brand integrations into console gaming titles such as EA SPORTS NCAA Football 12 and Fight Night Champion. Additionally, the relationship in 2011 produced the biggest ESPN poll vote ever for the Madden NFL 12 cover vote, logging nearly 13 million votes, the most ESPN votes ever for a joint collaboration. The Emmy award-winning EA Virtual Playbook also most recently extended to boxing and golf in 2011.