Signs Of What NFL Might Have Expected At Super Bowl

Judging by the evidence of a couple of specific instances, there might be a fair question for Baltimore Ravens fans to ask the NFL about who they expected to reach Super Bowl XLVI before the New England Patriots and New York Giants won their respective conference championship games a little over two weeks ago.

Just as the final seconds ticked off the clock in the Giants 21-17 win, their players dumped a bucket of Gatorade over the head of coach Tom Coughlin.The color of the Gatorade, you ask? Purple. When the Lombardi Trophy was presented to New York, tons of confetti rained down upon the players as they celebrated. The color of the confetti, you inquire? Purple. 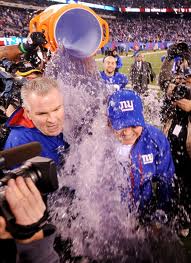 Coincidence, you say Me thinks not. In fact, on gambling sites that had a proposition bet on the color of the Gatorade that would be dumped over the winning head coach, purple was not even a betting option. Perhaps the NFL had already purchased the aforementioned refreshment and pieces of paper, in anticipation of not only a Ravens appearance, but an expected victory as well.

Conspiracy theories abound in the NFL and this one should not be discarded so quickly. Perhaps we will never know. However, all Ravens fans keep seeing those last couple of plays and wonder, "what if..."