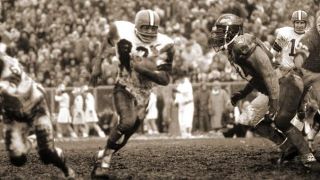 Some of you have probably already seen this photo-shopped picture going around the web. It shows Baltimore Ravens linebacker about to collide with Cleveland Browns Hall of Fame running back Jim Brown. These two players, who are and will be considered all-time greats, played over four decades apart, but the thought of the two of them on the same field at the same time, would be a fantasy NFL match-up for any true football fan.

Brown played for the Browns from 1957 through 1965. He finished his NFL career the leader in total rushing yards, single-season rushing yards, all-purpose yards, total TD's and rushing TD's. He is in the conversation as the best player in NFL history.

Lewis is the only player in NFL history to play such a demanding position at such a high level for as many seasons as he has, going into his unheard of 17th season in 2012. Can you imagine the ferocity of an open field collision between the two best players of their respective generations on either side of the ball?

What other one-on-one match-ups would you like to see across the generations of the NFL?