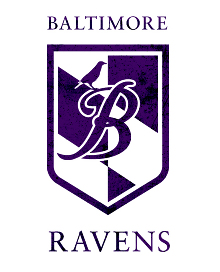 The Gridiron League, according to it's "owner" Wes Kull, is a work in progress. Kull likes to watch football but wishes that some of the NFL logs were more Budweiser and less Bud Light. Gridiron League is a collection of idealized NFL insignias that pay tribute to each team's history and geography in a period-specific aesthetic that glorifies the Vine Lombardi-era over the "Cold-Activated" era.

According to Kull, Nike is taking over jersey design and fabrication next season when Reebok's contract ends. He says:

"We can only hope that they will preserve the few remaining original logos and uniforms, and revive many histories that have long been relegated to ESPN Classic. As for the Ravens, Panthers, Jaguars and Titans, we can only pretend."

Wes came up with the idea of the Baltimore Ravens logo, with the shield more indicative of the state's jousting history, although he retains the Raven in the corner as a testament to Edgar Allen Poe. We contacted him regarding his justification for his logo design and plan to add it to this story as soon as he responds.