Sadly, "Cundiff" Is Now A Verb

Share All sharing options for: Sadly, "Cundiff" Is Now A Verb

Good news travels fast, but bad news travels even faster. Baltimore Ravens placekicker Billy Cundiff only missed a game-tying field goal less than 72 hours ago and already his last name is being used as a verb. At a recent college basketball game between the host Kansas Jayhawks and the visiting Texas A&M Aggies, fans behind the Aggies basket held up signs spelling out Cundiff's name in capital letter to distract the Texas A&M free throw shooter. (photo after the 'Jump') A YouTube video (above) was posted with a reference to Jim Carrey's 'Ace Ventura' movie.

They were referencing the AFC Championship Game kick that sailed wide-left, hoping that the free throw shooter would do the same thing. 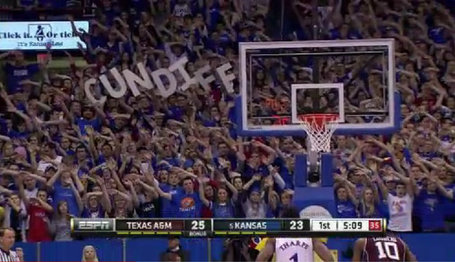 While most people are probably finding this funny, they cannot seem to grasp the crushing feeling that this young man must be feeling and was felling the moment the ball veered off his right foot, so wide to the left that it not only was no good, it completely missed the protective netting behind the uprights and landed in the crowd.

Hopefully, the negativity will die down quickly and Cundiff is not subjected to the verbal and written abuse that has even led to San Francisco 49ers punt returner, Williams, who botched two returns, to receive death threat after his San Francisco 49ers lost in dramatic fashion in overtime to the New York Giants in the NFC Championship Game.