The Baltimore Ravens will take their own fate in their own hands today as they will either earn or not earn the right to play for the ultimate prize of the Lombardi Trophy at Super Bowl XLVI in Indianapolis two weeks from today. While most true Ravens fans based the emotional state of the week ahead on whether their hometown team wins or loses, today should be one for the entire city of Baltimore to enjoy - or not.

Baltimore has gone all out in their support for the Ravens during this playoff run. Building are lit up at night in purple and even some with signs of encouragement. The Ravens logo is plastered all over town on sidewalks and painted on the side of hills around town. Fans have not been waiting for "Purple Friday's" to sport their Ravens gear and many wardrobes primarily consisted of purple clothing all week long. 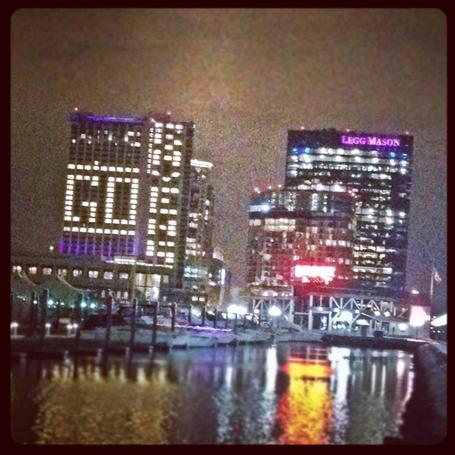 The Ravens, specifically led by head coach John Harbaugh, have been acutely aware of the pride that has swept across the towns, cities and state of Maryland, making efforts to mention how much it means to them and how much it meant to finally get a chance to play in front of their adoring fans last week. Those lucky enough to be in Foxboro, Massachusetts will be loud, proud and purple today and if they win, that legion of fans will surely grow in size for the trip to Indianapolis on February 5th.

The love affair between the Ravens and their fans has never been so deep and pervasive. When they first won the Super Bowl, it was such a surprise and a new thing for a franchise that was only five years old, so the groundswell took a lot longer to rise to the crescendo that by the time it did, the game and parade was already over.

Now, the city is filled with "veteran" Ravens fans, so this has not only been a great ride, it's been virtually expected due to the "spoiled" state that this team has instilled in us over the past four years. If the Ravens go on to win today and then again in the Super Bowl, the ultimate goal would have been reached and all fans will end their season happy. At the same time, a loss today should not damper the excitement and fun of the entire season's "journey," as there has been so much to be thankful of for what the team accomplished this season.

On behalf of all fans and I'm sure equally returned by the team and organization, we thank you for what has been and will hopefully continue to be, a great, great season.