The city streets of downtown Baltimore City were transformed into an IndyCar road race track this past Labor Day Weekend in the inaugural Baltimore Grand Prix took over center stage. The 2 mile course wound down Pratt Street past the Inner Harbor and Camden Yards where the Orioles ply (and I use the word "play" loosely!) before heading over to Pratt Street again where the finish line awaits. At the last minute I decided to attend, knowing this would be the final Sunday of 2011 without NFL football. Waiting until the race started, I was able to scalp a reserved grandstand ticket right before the finish line for about the same price as a regular-price General Admission ticket would have cost me.

The first thing you notice is the noise. The difference between the sounds these IndyCars make compared to the lone NASCAR race I attended is that this is a much higher-pitched whine than the low roar that the NASCAR cars make. Seeing the main drag of your city surrounded by high chin-link fences and concrete barriers with grandstands and advertising everywhere was a strange site. 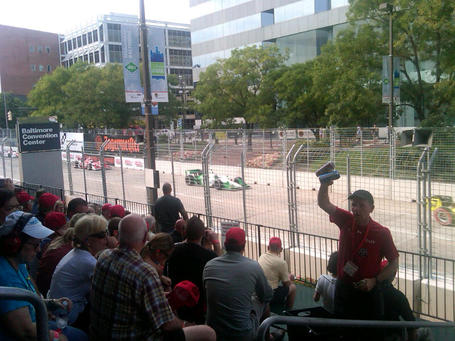 Normally, downtown Baltimore on a Sunday afternoon would be filled with a mix of automobiles, families and the sounds of summer coming to an end. Sunday, the deafening loud sounds of race-cars throttling up and down as they went into and came out of turns and then accelerated down the straightaways overwhelmed the ability to talk to even the person next to you.

Cell phone conversations were limited to the time that the racers were on another part of the track. I grabbed my seat nine rows up along the Pratt Street straightaway and snapped photos and video as the cars sped by in a blur of colors. My saving grace was the brains I had to purchase rubber earplugs prior to crossing the pedestrian bridge to the seating area in front of the Baltimore Convention Center. 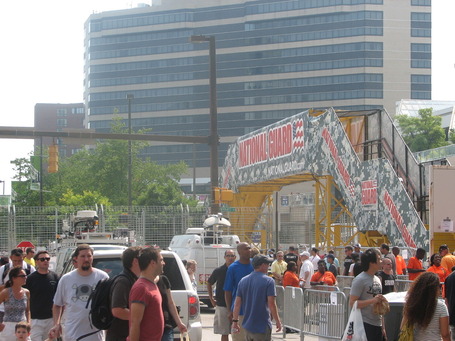 Five bucks for a minuscule amount of cinnamon almonds and I was a happy camper in my seat with a perfect view of the incoming racers. Without being a fan of the IndyCar racing series, the only names I recognized were former Dancing With the Stars contestant Helio Castroneves and of course Danica Patrick in the green and black GoDaddy.com car. With the drivers unrecognizable under their helmets and wedged into their cockpits, the only way to identify them was by their cars and sponsors, and other than the typical oil company sponsors and Danica's memorable sponsor's TV ads during each Super Bowl, the Buffalo Wild Wing car was the only other one worth remembering. 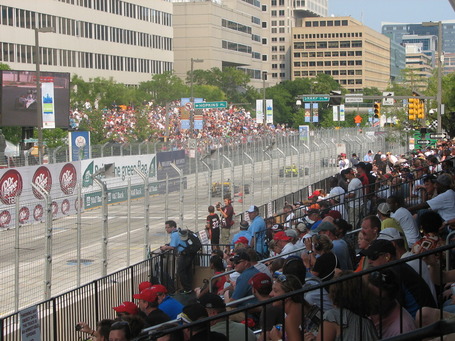 These photos and accompanying video gives you a great idea of what I saw, heard and experienced. The photos show you the great view I had and the video gives you a bit of the idea of what the noise sounded like. As I said, thank god for the $3 ear-plugs. Somebody, in addition to the city of Baltimore, made a ton of money on two small pieces of rubber and a string. Enjoy!