The Baltimore Ravens have a great fan base, with some fans just a slightly bit "bolder" than others. These fans, known as "Super Fans," dress up in wild outfits, cheer louder and in many cases, have developed their own fan base as well. A few of these fans are well-known around the Baltimore community and regularly attend pep rallies and their local events in and around town.

Perhaps the most familiar of these fans is Wes Henson, known as "Captain Dee-Fense." Captain wears a costume that incorporates his military background along with his passion for the Ravens. He shows up at so many community events that he has them posted on a schedule on his Facebook page for his fans to follow him. 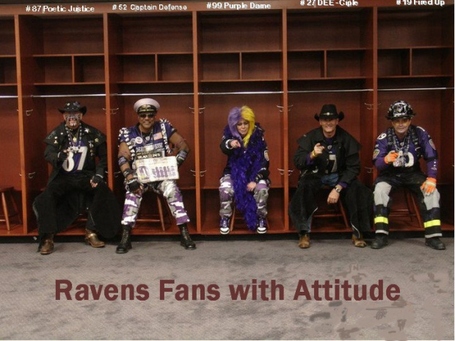 Close behind Captain Dee-Fense on the popularity scale as the Ravens "Boldest Fan" is Chip "Fired Up" Riley, who like Henson, combines his passion for the Ravens with his fire department background. A retired fireman, Chip's outfit makes him look like a Ravens Fireman, hence the name, "Fired Up." 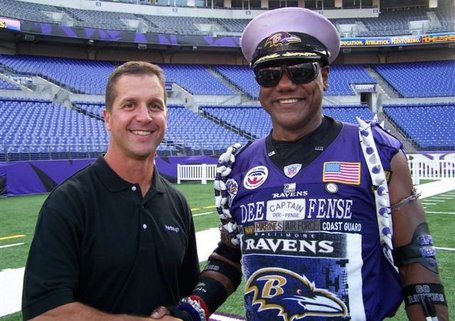 There are other fans who are in the category of "Super Fans," PressBox Online did perhaps the best story detailing the bigger, louder and most popular ones whose passion is released in the form of donning outlandish uniforms and parading around the stadium on game days. While their dedication to their favorite NFL team and determination to lead other fans in cheering the Ravens onto victory, they just don't outshine Captain Dee-Fence, who outfit and imposing figure make him, in this writer's opinion, the Baltimore Ravens "Boldest Fan!"