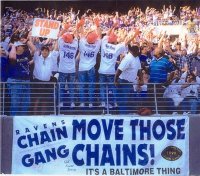 Every franchise has their boldest fan that the fans all know and cheer for whenever they see them, be it at the game or out in public. The Oakland Raiders have their Raiders Nation crazy dressed-up guys in face paint, spiked shoulder pads, etc. The Washington Redskins have the "Hogs and Hog-ettes." Even the Cleveland Browns have their "Dawg Pound."

The Baltimore Ravens have a couple of well-known fanatics as their biggest fans. The "Chain Gang" signal first downs and the team has even adopted and puts up their "Move Those Chains" cheer on the scoreboard. "Captain Dee-Fense" struts around the stadium, visiting tailgating lots prior to the games, inside the stadium during games and making local appearances in the community. even in commercials.

Guinness is sponsoring a series of posts, three in all, that will be asking us who is the Baltimore Ravens "Boldest Fan." In addition, they want to know who is Baltimore Beatdown's "Boldest Fan" on this site. That could be a very fun and interesting discussion as we debate which of our most fervent poster and commenter has earned the right to be named Guinness' Boldest Fan on Baltimore Beatdown.

First up will be the Ravens' Boldest Fan, and along with this post and the next one, we encourage you to "nominate" your friends here on Baltimore Beatdown who you think would be worthy of the title of Boldest Fan.