Don't expect new Baltimore Ravens running back Ricky Williams to get onto the playing field in Thursday night's first exhibition game of the 2011 NFL season. However, Ravens head coach John Harbaugh only said that he "encouraged" Williams not to play in the pre--season game, which means he could end up possibly getting in for a few plays.

According to Harbaugh in today's post-practice interview, the main starters should only get a series in the game, with others playing as much as the first quarter. However, after that, expect to see a majority of the rookies, undrafted free agents and a significant dose of rookie QB Tyrod Taylor in the game.

Williams took part in a few drills in practice but is still learning the Ravens system and playbook. He wore the number 38 on the practice field but announced afterwards that he had reached an agreement with RB Jalen Parmele to get his normal number 34 that he has worn his entire NFL career. 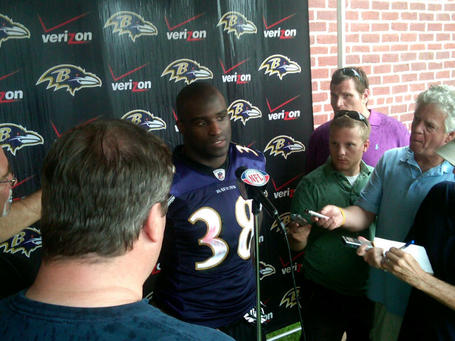 In his media interview, Ricky said he considered the Detroit Lions in addition to the Ravens but felt this was the best fit for him. On Joe Flacco, Williams noted, "I've played against him a bunch and he's killed us every time." He added that he loved football and it's how he earns his living, but he did travel during his time off from the game since the end of last season and his signing with the Ravens this week.

No longer with his trademark dreadlocks from his younger days, he looked fit and happy and ready to play an important part of the Ravens offense.