With the Baltimore Ravens scheduled to play the Philadelphia Eagles this Thursday in the pre-season opener for both teams, the Ravens made relatively sure that their gameplan will not be revealed as they had the media turn off their cameras for a majority of the practice session on Monday afternoon.

We did get to see this one guy, #3, who seems to play the safety position like a seasoned veteran yet wears a jersey with no name on it. As punter Sam Koch booms punts 70 yards from the back line of the end zone, rookie WR Torrey Smith is taking his turn returning them. As he has the past three days, cornerback Cary Williams continues to shine, playing perhaps the best corner of anyone in camp so far.

On an 11-on-11 drill, LB Jarret Johnson throws doen RB Jalen Parmele so hard, Jalen's helmet flies off, then grabs Parmele and lifts him to his feet once the play is over. 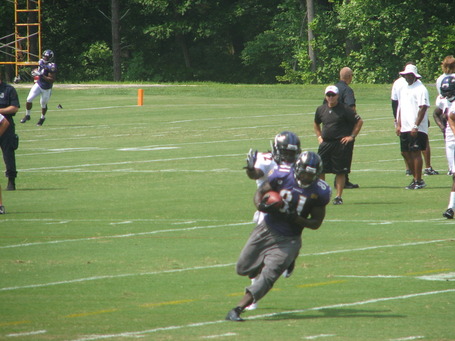 OLB Terrell Suggs is his normal vocal self, teasing WR Anquan Boldin after "Q" drops a nice pass from QB Joe Flacco. Suggs teases, "Look at the QB, 81, you just broke his heart!" However, both Flacco and Boldin have the last laugh, as Joe leads the offense downfield in the two-minute drill, ending with a touchdown pass to Anquan, who outjumps two DBs for the reception and then punts the ball straight up in the air in celebration. This prompts T-Sizzle to give the offense their props by saying, "That's a man's drive there!" 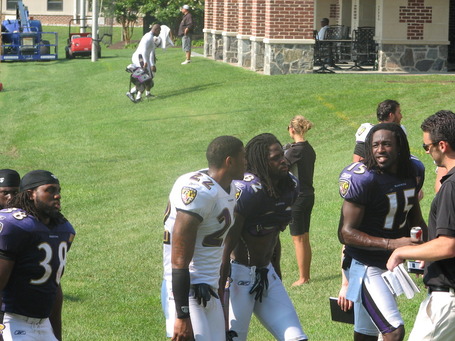 As practice ends, the players trudge to the locker room, with teammates yet practice opponents, rookies Jimmy and Torrey Smith in deep discussion.