Once the Baltimore Ravens finished their Saturday practice at M&T Bank Stadium, the players were supposed to go inside to the locker room and get ready to return to Owings Mills. Signing autographs like they did last year was not originally part of the plans. However, whether it be following head coach John Harbaugh's orders or taking the initiative on their own, the players fanned out along the railings surrounding the playing field and signed as many autographs as they could before they were herded back inside.

I was able to get onto the field and snap photos of the players as they signed for the excited fans, and even got a couple of players to comment on the thrill they were giving to the people who normally flock to McDaniel College in Westminster but have been unable to see their beloved Ravens after the team had to cancel their normal routine and hold Training Camp at their in-season practice facility, where there was no room for the fans to attend.

Two players, one the newest Ravens fullback and the other the team's most popular player had this to say as they signed for fans on Saturday afternoon: 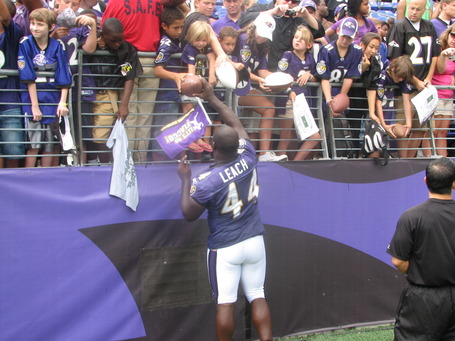 Baltimore Beatdown: While you're signing, what's it like to see 20,000 people plus out here for a practice?

Leach: "Oh man, it's crazy! I've never been part of anything like this. It's great to see the fans and they welcome me to Baltimore."

BB: Is your arm more tired doing this than during a game?