Michael Ricks was at a family barbecue when the call came. The Baltimore Ravens were inviting the undrafted free agent to their Training Camp to compete for a spot on their roster. "Wow" was all Ricks could muster up to say when he was given the news over the phone. When asked how soon he could get to Baltimore, Ricks started packing right in the middle of the family gathering.

The product of little Stillman College in Tuscaloosa, Alabama had made it to the pros. In his 20 career games at Stillman, he had seven interceptions, returning two of them for touchdowns. He wasn't the first from the school, but he was the only one from this year's draft class to even be offered a sniff of the NFL. With family and friends celebrating all around him, he kept his emotions inside, but once he was on his way to the airport, the tears of happiness began to flow. 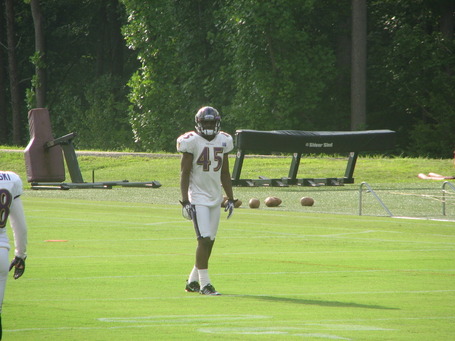 "Sambo" as he was affectionately known to his family, was going from the small town of Leighton, Alabama, also Ravens GM Ozzie Newsome's hometown, to his college with enrollment of 1,000 students, and now to the big city of Baltimore, Maryland. Michael's grandfather gave him the nickname and whenever his father uses the name, Michael says it makes him "go harder."

Now, incredibly, he's on the Ravens practice field, looking at safety Ed Reed next to him and Ray Lewis in front of him. He called it "unreal" to be on the same field with two future Hall of Famers. While he realizes that he is a longshot to make the team, he knows the best thing he can do is to give the coaches what he told me was a "good look" and that he can play both cornerback and safety and would do whatever it took to make the team.

Regardless of his future, the pride of Stillman College has already had an amazing experience and made his father so very proud. Now all he has to do is the same thing for the Ravens coaching staff.