The "Other" Terp Wide Receiver In Ravens Camp

Share All sharing options for: The "Other" Terp Wide Receiver In Ravens Camp

As most fans were excited to hear that the Baltimore Ravens drafted University of Maryland WR Torrey Smith with their 2nd round pick in the 2011 NFL Draft, there was another Terrapin wide receiver sitting at home waiting for the call that never came that day. LaQuan Williams was the "other" Maryland receiver, who other than wearing similar dreadlocks, bore almost nothing else in comparison with the more popular Torrey.

However, the story doesn't end there, just yet. When the NFL owners and players finally worked out their differences on a new Collective Bargaining Agreement and were able to contact and sign undrafted free agents, the phone finally rang at LaQuan's East Baltimore home. His favorite team, his hometown Baltimore Ravens wanted to offer him the opportunity of a lifetime and a chance to make the Ravens roster.

So when the phone rang and the Ravens were on the other end of the line, what was the first thing that Williams did?

"Dropped to my knees and thanked God (laughing). I just told the coaches this was my dream job, to come in here and give my best effort. I'm not going to let no one out-work me."

(Read more on my interview with LaQuan Williams after the 'Jump') 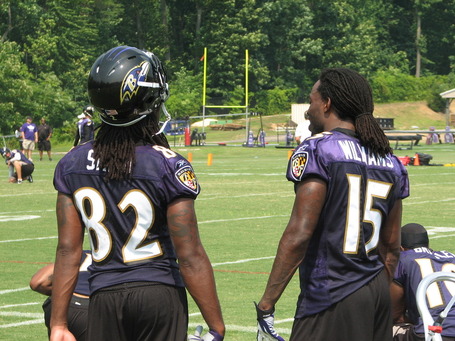 So who did LaQuan call as soon as he hung up from the Ravens?

"I called my mom, my dad and I called Torrey. You know, me and Torrey are real close, we were both on the phone, real hyped we were playing together."

Asked what the biggest difference between the college and pro training camps, LaQuan had this to say:

"Just the tempo. The tempo is much faster, the vets know what they're doing, so it's harder to outsmart them, but it's just the tempo that's the main difference."

LaQuan stayed in shape while waiting for that phone call and after his finished his conditioning test, he got the highest of compliments:

"After my conditioning test, Harbaugh came up to me and told me I looked like I was in pretty good shape, which I was. Every day I worked out for at least three hours, some days I worked out twice a day."

So far in Training Camp, LaQuan has impressed many with his solid hands, but I wondered if there was a difference in the zip of the ball coming from QB Joe Flacco:

Williams realizes that in order to make the Ravens roster, he'll have to do it on Special Teams.

As for my all-important "Dreadlocks Theory?"

"I actually got the dreads for concussion purposes. When I first got to college, I cut all my hair off. I was playing defense and when I came down and made a couple tackles, I felt all the impact, so I said, 'forget this' and grew my hair back and got a little bit of cushion inside my helmet."