The Lingerie Football League's Baltimore Charm continued practicing in preparation of their September 16th season opener, when they host the Orlando Fantasy at First Mariner Arena in downtown Baltimore and live on MTV2 at 10pm ET. In pads, hitting hard with coaches screaming, any resemblance to what many non-believers might call "powder-puff" football is proved inaccurate by an big hit that sends one player to the Emergency Room with an injured shoulder.

The 2011 LFL season kicked off with the Green Bay Chill hosting the Minnesota Valkyrie live on MTV2 Friday night. The Charm coaches and players were not impressed with the level of play by these two expansion teams. Specifically, they had issues with the Green Bay's player known as "Big Momma," who at 180 pounds, seemed to look out of shape and goes against the type of "product" the league should be showcasing and the girls have worked so hard to portray. To show displeasure with a player that could damage the reputation of working so hard to stay in shape and play solid football, one of the girls renamed the player as "Big Nasty."

Back on the Charm practice field, Coach Reeder said of last week's practice, there was more blood spilled in their scrimmage that he's seen in any regular season game. In practice, watching Kyle DeHaven, who will play wide receiver and running back on offense and middle linebacker on defense, Coach Reeder points and promises, "you're going to be writing a lot about that girl." Regarding starting QB Stacy Moon, he says, "Stacy is growing more comfortable every day." 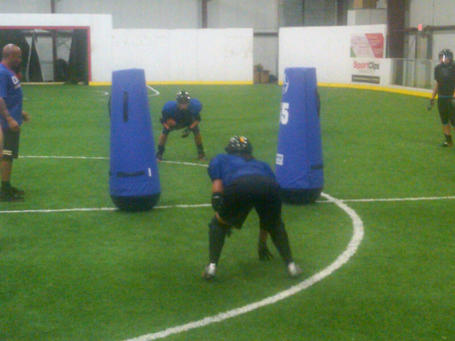 The team moves onto two-on-two blocking and tackling drills, but that stops shortly after one assistant voices displeasure with the poor tackling technique, shouting, "I'm not going to war with any of you! I am not going to allow you to embarrass me!" Thus, the drill switches to one-on-one, with a ball carrier versus a tackler, and the pads begin to pop with solid hits (One-on-One tackling drills).

After a three hour practice session, Coach Reeder gives the girls a 20 minute break and then the team splits up to scrimmage with the first team offense going against the second team defense. In LFL football, many girls play both offense and defense, so Coach Reeder wants to see the offense in sync, so all the starters on offense are first team, while many on the defense are reserves.

This leads to the offense moving the ball well on both rushing and passing plays, with Kye DeHaven scoring twice on blazing fast runs after catching short passes and RB Kacey White scoring on a long run (Kyle DeHaven runs for a TD). Despite being short-handed on defense, Defensive Coordinator J.J. Morrison still blows his top at his defensive players who either are out of position or just not making tackles.

Based on the impending storm hitting the area, Coach Reeder cut practice short and lets the players go, asking that they drive careful so they can get home safely and come back for practice again tomorrow.