For those of you who can't remember former Baltimore Ravens cornerback Daren Stone, read the earlier post on Baltimore Beatdown here, which regurgitates your memory on the 2008 AFC Championship Game loss to the Pittsburgh Steelers. Stone was involved in a play which had a huge impact on the game, drawing a personal foul penalty when the game's outcome was still in doubt.

Three years have passed nd Stone is now playing in the Canadian Football League and doing very well for the Calgary Stampeders. I touched based with his publicist, Triena Lewis of CalCam PR, and she had Daren answer some questions from me about that painful memory and his ability to rise above it by putting it behind him and focusing on playing solid football, whether it be in the CFL or perhaps another chance to return to the NFL.

Baltimore Beatdown (BB): When you saw the penalty flag and knew what had happened on that fateful play, how did you feel?

Daren Stone (DS): "When I saw the flag I was hoping the penalty wasn't on me, after seeing the replay at that time is when I realized...it was on me. As the referees march the play back inside the 20 yard line after a good return, I was "devastated" and very "disappointed" that my 1st penalty of the year was at such a crucial time. I would like to apologize to the Ravens nation and Ravens fans, and I only hope they would accept my deepest apology."

(Click on the 'Jump' for more of the Daren Stone Q&A and links to his CFL Team and NFL bio pages.) 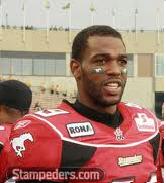 BB:  You obviously were a football star in high school and college to even get the chance to play in the NFL. What was it like to finally make it in the NFL?

DS: "Making it in the NFL was a dream come true. I always wonder if I could make it that far coming from a smaller school like . The Atlanta Falcons drafting me in the sixth round of the 2007 NFL Draft still remains the highlight of my career."

BB: Having a chance to play in such an intense game in a rivalry among if not the best in the NFL, how excited were you to be playing in the AFC Championship Game?

DS: "Playing in the Steelers-Ravens rivalry was very exciting within itself, being able to play in a game that could ultimately lead to a trip to the Super Bowl are the types of games players live for!"

BB: Didn't you sustain a concussion earlier in that game before returning and being involved in the play the most Ravens fans remember?

DS: "Yes, I did sustain a concussion in the 1st play of the game, but I returned after half time. "

BB: How did you get the chance to play in the CFL and how does it compare to the NFL?

DS: "The Calgary Stampeders approached me with interest after seeing me workout at one of the CFL tryouts. I still very much loved football there was NFL lockout so I went for it.  The obvious difference is the CFL field is bigger and we play 12 men at a time on the field. Besides some other minor rules, its still football we have to throw, catch, run, and tackle.  "

BB: Do you still follow the Ravens and are you tight with any current or past Ravens players?