Share All sharing options for: Ravens Training Camp Comes To An End

The Training Camp portion of the Baltimore Ravens pre-season has come to an end, at least as far as the media are concerned. Wednesday's practice is closed as the team goes through a walk-through in preparation for their third exhibition game versus the Washington Redskins on Thursday evening. Typically, in a normal summer Training Camp, the Westminster portion ends right before the third pre-season game and the team moves future practices back to their Owings Mills facility.

With no Westminster Training Camp, the current procedure is for the team to play Thursday night, have Friday off and then begin preparations for the final exhibition contest in Atlanta next Thursday night and then install their gameplan for the first regular season game against the Pittsburgh Steelers in Baltimore.

From now on, the media's access to practices will significantly decrease, although as the roster is cut down to the final size, the media will then have access to the players in the team's locker room post-practices. In the meantime, today's practice was spirited, although with a little sense of humor as the defensive players all switched jersey numbers, making it difficult at times to figure out who was on the field and who just made that play.

The ESPN NFL Live crew was in town to watch practice and afterwards, slipped inside to await the players and coaches for more in-depth interviews that obviously will air at some future point on the network. I noticed the crew included Jon Gruden, Ron "Jaws" Jaworski and perhaps also Suzy Kolber. 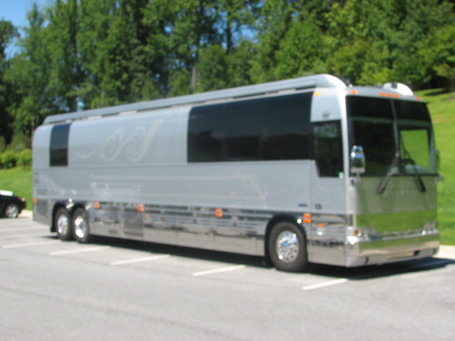 In practice, QB Joe Flacco was looking especially sharp today. He hit WR Lee Evans across the field in the corner of the end zone. His rocket arm was on display as the ball's trajectory was one that only the QB's with the stronger arms in the NFL can throw. Flacco makes a coupe of more impressive throws to rookie WRTorrey Smith, TE Dennis Pitta and Evans again. Finally, his final throw of the series was another dart to Lee Evans' back shoulder in the front corner of the end zone that was virtually indefensible. 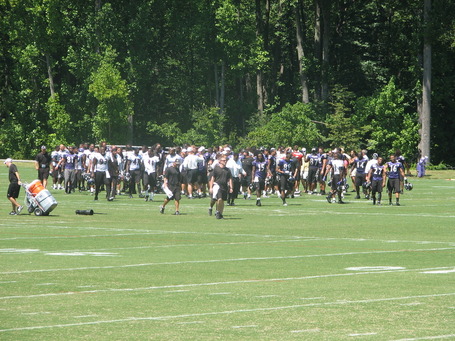 After a shorter practice that started before noon, the team gathered together for a cheer and hurried off the field, as this was one of the earlier practices and my guess is that the players had more meetings or just wanted to get off the field and relax. Before they could do so, they were herded to various media personalities for short interviews as noted in photos below. 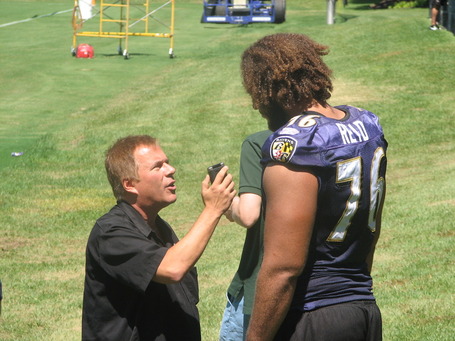 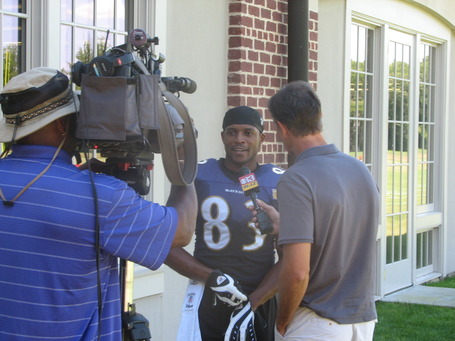 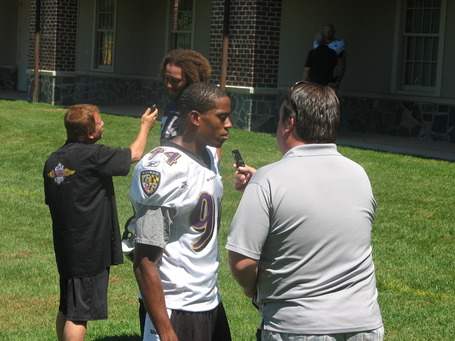 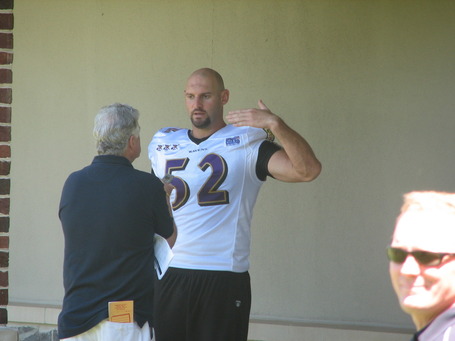 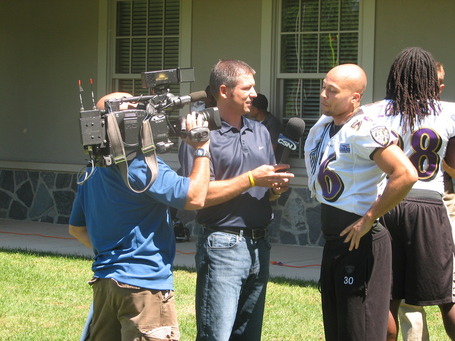