The Baltimore Ravens moved their Sunday practice session indoors under the threat of thunderstorms this afternoon and it was Baltimore Beatdown's first time inside the massive indoor playing field at One Winning Drive. A full field, with goalpost uprights hung from the ceiling on wires to eliminate the need for the single goalpost. There's a huge banner of the Lombardi Trophy at one end to remind the players at all times of their annual ultimate goal of winning another Super Bowl.

It's nice to see veteran linebacker Ray Lewis back at practice today after being excused for most of the past week for personal family reasons. The Ravens made a couple of moves regarding shoring up their offensive line, signing former New England Patriots offensive lineman Mark LeVoir and former Tennessee Titans center Jason Murphy, and releasing guards Colin Murphy and Kyle Calloway. More on these signings at BaltimoreRavens.com. LeVoir is getting a lot of reps at right tackle with Oniel Cousins inside at right guard with the second team offense. 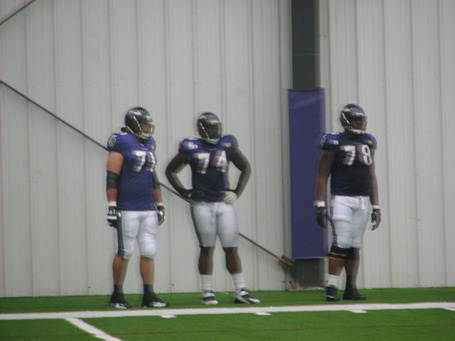 In team drills, CB Cary Williams locks down Anquan Boldin, continuing to make a statement for a significantly increased role in 2011. As soon as that is written in my notes, undrafted rookie WR Rodney Bradley makes a great catch over Williams, leaving Cary visibly upset about being beaten. 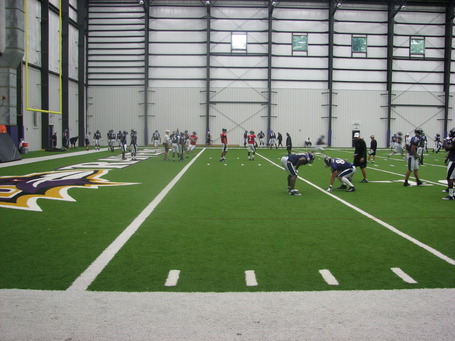 Sam Koch is booming punts off of the ceiling of the indoor field, getting three balls stuck up in the netting among the air vents. A bunch of veterans, including Ed Reed, Chris Carr and Jarret Johnson are not practicing this afternoon. That leaves the first team cornerback tandem as Domonique Foxworth and Cary Williams, with Lardarius Webb and rookie Jimmy Smith making up the second team.