'Guts & Glory: The Golden Age of American Football,' by Neil Leifer (Publisher: Taschen Books) is a huge, coffee table size book, with almost 300 pages of information and especially classic photographs from one of the NFL's best photographers.

Known in many different sports, Leifer has snapped some of the most classic football pictures in league history, including the famous one of Baltimore Colts RB Alan "The Horse" Ameche's game winning TD run in the 1958 Sudden Death NFL Championship Game when the Colts defeated the New York Giants in what has become known as "The Greatest Game Ever Played." His story of how he got into that game, much less positioned to capture one of the most pivotal moments in NFL history is fascinating.

(Click on the 'Jump' to read more and see another famous classic Leifer photo that you are sure to remember.)

The book captures the essence of what the game is all about, where it came from and the legends who built it long before the age of information technology came into the virtual picture. Interestingly, the book is written in both German and French in addition to English, although its pages are obviously dominated by the universal language of the photograph. With stories behind many of the pictures, Leifer tells tales of specific moments in history, many behind the specific photos themselves, not only of what was happening in the pictures he snapped, but how he got in place to take the shot in the first place.

Leifer is also as well known for his classic photo of a young Cassius Clay (soon to become Muhammad Ali), standing over a fallen Sonny Liston in their 2nd Heavyweight Championship bout in 1965. 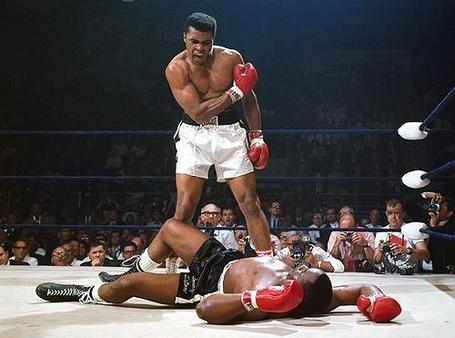 I asked Taschen Books Public Relations Manager Creed Poulson if I could get a quote from Leifer on if he knew he had just snapped classic photos at that the moment, but although he was too busy to answer me directly with a quote, this is what Poulson reported his answer was to me:

He has said before to press, that he did know that he had gotten a good shot (w Ali and Ameche), but it was impossible to tell or know at the time just how big both of those images would become. And what they would mean historically in terms of sports history and their significance. He’s been very fortunate to be at the right place and the right time.

This book is great reading if you are an old-timer or even a young football fan with a thirst for knowledge of the NFL's grass roots. Give it as a gift, or just buy it yourself and place it on the coffee table and wait for people to pick it up and be amazed at the quality of the photos and the discussions that will follow.