Christina Deavers of the Baltimore Charm might be the perfect example of the saying, "It’s not the size of the dog in the fight, it’s the size of the fight in the dog." The diminutive cornerback and running back on the Lingerie Football League’s local team knows she can get lower than most of her opponents and run without being seen or be fast enough to stick on the hip of the opponent’s receivers in pass coverage.  At 5’2", she understands the risks and the uphill battle for one of the smaller players on the arena field, but that does not deter her at all:

"Yes the LFL is a very physical game but it's a game I now LOVE. Coach tells us we have to be more physical than the player in front of us I know I'm more physical and aggressive this season. They call me ‘Mighty Mouse’ cause I'm strong and I can move quick but I also have the drive to never stop." 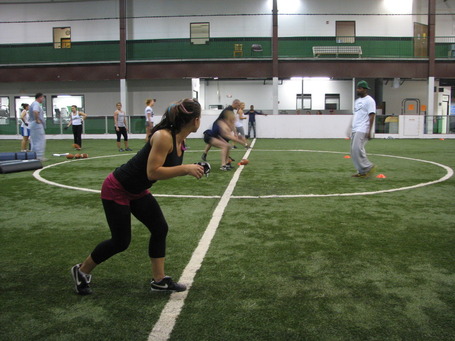 Christina followed a very similar path to the LFL as so many other players in that she saw previews of the games and told herself that she really wanted to do that. The season was already underway but she had a chance to tryout and says she even shocked herself doing things she thought she could never do:

"That day I became a Baltimore Charm that's something I will never forget. All my life I've played Softball and was a Cheerleader and worked very hard at the sports I played but football takes so much more. It’s a pretty hard sport to learn if you have never played so I'll say if I didn't have the athletic experience I don't think I would be where I am today. I do believe if you put your mind to something you really want then you can do it."

When asked the same question that every player in the Lingerie Football League gets asked about how "real" the football actually is compared to what they expect when they hear that the players are wearing sexy and skimpy little outfits under their padding, she chimes in with the same ‘mantra:’

"The LFL is as real as it gets. You know the saying never judge a book by its cover? Well you shouldn't judge the LFL by its cover. If you haven't been to a practice, game or even seen it on TV you have no clue what you’re talking about. The LFL is just like the NFL but with different rules. I'm not here to be on a cover of a magazine or to be a model running around with a football. I'm here to work my ass off to get to that winning spot and I know I can speak for the whole Baltimore Charm on that. So if you really want to see how REAL the LFL is come see for yourself."

Further proof of how seriously the players in the LFL take the game is the time and effort they put into getting and staying in tip-top shape, for what can be only as few as four games in the entire season. However, along with learning the strategy of the game, staying in great shape has its benefits outside of the arena:

"Yes it does get hard especially with the economy the way that it is, but all I can say is that when I signed on with the Charm I have been 100% committed to this team and to the LFL. Staying in shape has its ups and downs but you have to do everything you can to get to where you want to be. I love to train and stay in shape it feels great to know how far you have you go to get the best results of your life. Coaches always say someone else somewhere else is doing more and working harder then you, so what are you going to do about it? I have to be the best when I hit the field so the conditioning is not a problem."

Christina has realistic expectations for her team, and lists them in order of how they’d like to grow and succeed, after being an expansion team in 2010 and now having a year of experience under their,…uh…belts:

"Yes it was an eye opener. We (her Charm teammates) have been working our butts off trying to meet our team goals. One of our goals is to finish better than last season, next is to make it to the playoffs, next is to win a playoff game, then play in the championship game and win it. That is what everyone should want and nothing less. So let's put it like this: We are a new team with new goals and expectations for the 2011 season. As for my personal goals, I want to get stronger, faster and better at everything I do. I never want to give up. I will push myself till I can't push no more. I WANT TO WIN."

For those of you who want to get to know the Christina Deavers "off the field," here is what she says about herself:

"Let's see, I have three sisters and one brother. We’re all very close in age and we’re also very close as a family. We didn't have much growing up but going through the years of rough times made us the family we are today. We all love each other very much and would do anything for one another. I have to say my mother is a very strong woman and has done so much and my father is a wonderful man. I have a dog. I love going to the gym. I like to help people in any way I can. I like all kinds of music. I love to dance and would love to be a backup dancer for a great singer."

So when you go to watch the Baltimore Charm play this fall, look for the little player with the non-stop motor and you’ll finally see for yourself and understand why her coaches and teammates call her "Mighty Mouse."