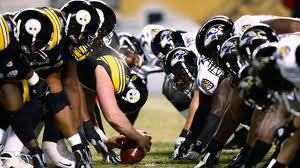 Over at ESPN.com, James Walker posts a poll in his AFC North Blog, asking fans to vote on who they think will win the week 1 matchup when the Baltimore Ravens host the Pttsburgh Steelers. What messes up the voting is that along with the choices of either the Ravens or Steelers is the option to "vote" for "There won't be a week one."

What makes for interesting reading here is not so much the story, poll or current results (more than half like Pittsburgh), but the comments following the story. Fans of both teams talk the same type of trash between each other over this rivalry as they do here on Baltimore Beatdown, especially during what is known around these parts as "Steelers Week."

Many of the fans trash the poll and the past stats, such as Ravens QB Joe Flacco never beating the Steelers when Pittsburgh QB Ben Roethlisberger has played, as well as Ben not having lost to Baltimore since 2006. Some fans note that whatever does happen, it will continue to be the best rivalry in the league and those who do predict a winner do so by the standard deviation in these games of just three points.

Let's replicate this poll, without the third option, to see how we'd vote: