Share All sharing options for: Matt Stover Retires a 'Raven"

Former Baltimore Ravens placekicker Matt Stover officially announced his retirement from the NFL this afternoon at the team's Training Complex in Owings Mills, Maryland. Flanked on the podium by owner Steve Bisciotti, General Manager Ozzie Newsome and head coach John Harbaugh, each took turns making comments complimenting Stover for his performance both on and off the field.

Newsome called Stover, "one of the most reliable Baltimore Ravens that we’ve had in this franchise." Harbaugh said in reference to Stover's game-winning 43-yard FG to beat the Tennessee Titans in the playoffs in 2008, "Matt Stover goes out there and takes his patented Matt Stover stance, and I think we all knew that kick was going through the uprights, and it did. ." Bisciotti noted that, "My wife has owned one Baltimore Ravens jersey in the last 11 years, and it’s Matt Stover’s." 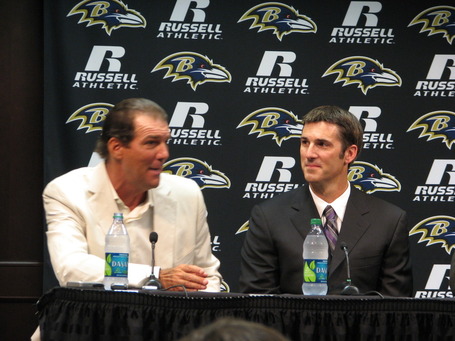 Bisciotti reminisced on the five field goals Stover kicked in the Super Bowl-winning season that beat the Jacksonville Jaguars, 15-10, summarizing, " we’re allowed a little hero worship around here in Baltimore with our kicker, because it’s tangible," and then announced that Stover's name is ging up on the Ravens 'Ring of Honor' at M&T Bank Stadium on November 20, 2011 at the home game hosting the Cincinnati Bengals. 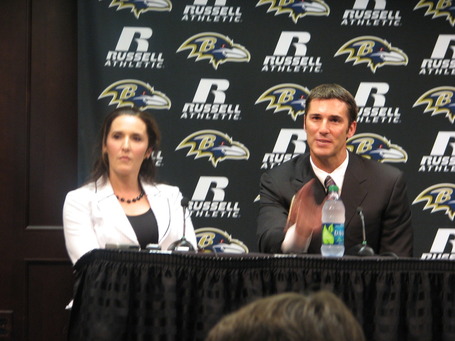 Stover, who is an exceptionally poised speaker, started off saying, "Playing for the Baltimore Ravens, I’ve always said, is a privilege." He added, "Baltimore has been a phenomenal, phenomenal place for me and my family." A deeply religious man, Stover feels his legacy has been set by not only what he's done on the field, but off of it as well.

He gave the Ravens current placekicker a vote of confidence, noting that, " the team is in great hands with the kicker that they have now in Billy Cundiff."

He ended his comments saying to Newsome, ""Ozzie, I can’t thank you enough for your investing in me."

The media then bombarded him with questions, asking him his greatest memories. He spoke about how he ended his Ravens career with that game-winning kick against the Titans in the 2008 playoffs and his last NFL game was in the 2009 Super Bowl with the Indianapolis Colts.

Asked which of his kicks meant the most to him, he quickly answered the Titans kick and also the one at the end of the first half of Super Bowl 35 to give the Ravens a 10-0 halftime lead. In the locker room before that game, the defense called the offense out, saying if they could get the defense ten points, they win. Stover's kick made it 10-0 and the rest is history!

I asked Matt that since he spent a portion of his career in Cleveland before moving here with the team in 1996, what would he say to the Cleveland fans who don't want to see former Ravens owner Art Modell in the Pro Football Hall of Fame:

"You know, Art is a great man. He’s done a lot of great things in the NFL, and I understand some of the animosity they have toward Mr. Modell. But with regards to what they ended up with, it is a very great situation – with a new stadium, a very wealthy owner – a situation that they would not have had if Art would have stayed. So, a three-year hiatus from football, I think was a good thing. And, Art ended up landing well with his team. And as you know this, we got him a Super Bowl. I think both… And Baltimore deserved the team, as you know. It was a drag how it happened, but how it ended up… I think both cities ended up very blessed."

To see the entire transcript of the Matt Stover Press Conference, go to BaltimoreRavens.com.