The Baltimore Ravens held a Press Conference this morning at their Owings Mills, Maryland Training Complex to introduce their first two selections in the 2011 NFL Draft. Both Colorado's Jimmy Smith and Maryland's Torrey Smith made it here to be introduced to the media and answer questions. The room was filled with cameras and reporters, including Baltimore Beatdown.

The first questions were directed at Jimmy Smith, who represented himself with class and dignity, not avoiding answering any questions about his troubled past, saying that those were the type of dumb mistakes that every American youth makes. Referring to Jimmy, I asked Ozzie about the little exchange he had with Smith during the photo session and his answer drew laughs from everyone in attendance:

"First he said I'm taller than you. I said I'm six-three and you're six-two. But I want to go on record here that you're a pretty big corner, but you couldn't cover me." When Ozzie said, "six-two," Jimmy interrupted to correct him, "six-two-and-a-half."

(Click on the 'Jump' to read more, including my question asked to Torrey Smith) 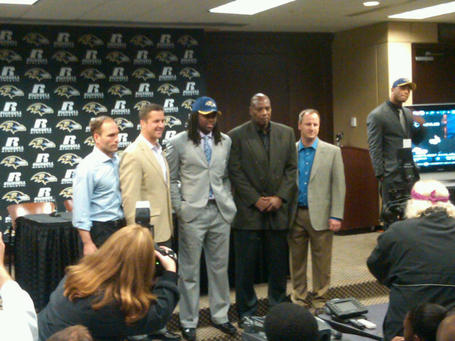 The questions turned towards the former Terp, Torrey Smith, who brought his entire family up from College Park with him today, including his very young-looking mother. If you haven't read the amazing story from the Washington Post about the hardships Torrey had to endure and his mother's role in his upbringing, trust me, it's worth the effort and you will root even harder for this young man afterwards. Then, you'll understand why he is jokingly referred to as "The Microwave King."

I asked Torrey if he looks forward to his match-ups in Training Camp with the guy next to you and do you plan to beat him?

"I definitely plan to have some fun. I feel like they brought us in both to kind of make an impact and we're going to push each other to both be the best players we can be."

Both kids handled the questions well and look to be solid contributors and class people both on and off the field.