Share All sharing options for: With the 85th pick in the 2011 NFL Draft, the Baltimore Ravens select... 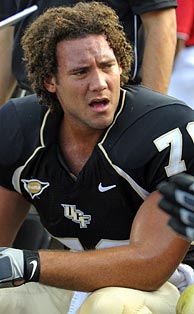 ....Jah Reid, offensive tackle, University of Central Florida. The huge offensive tackle (6'7", 327 pounds) is physically gifted but still needs technical refinement, according to NFL.com. The Baltimore Ravens traded their 90th overall pick and their 191st pick (second 6th round pick) to move up to the Philadelphia Eagles' 85th slot to take Reid. Originally projected as a Day Two pick, he is thought to be a project but might be able to start on the right side of the Ravens line.

Reid was selected to the coaches' All-Conference USA First Team, starting all 14 games in his senior season, He isa good athlete but reportedly plays too upward and can be bull rushed. The Ravens get help on the offensive line, an area of concern going into the draft with the uncertainty surrounding the status of Jared Gaither.

In the team's press conference immediately after the pick was made, I asked Ravens GM Ozzie Newsome why they targeting him and thought he wouldn't last to the 90th pick in the draft, making the Ravens finding it necessary to trade a 6thround pick along with their 90th pick for the Eagles' 85th slot.

Newsome said that the team didn't want to wait and have another team ahead of the Ravens grab Reid despite saying,

"That's one of the tings where you get in the Draft Room, and you start to look at the board, and I think Eric says it in the right manner: Who is the guy that we would be excited about getting? We could have probably stayed at 90, and (Reid) could have gotten picked. We would have ended up with al player... We would have gotten a good football player, but I don't know if we would have been as excited about getting that player as we (were) about getting Jah Reid. We have a history. We gave up a sixth-round pick, but we have a history of taking some of our other picks and being able to move back and recapture picks. One we give up a pick, that (doesn't) mean we won't get back inthe business to recapture the pick."

Director of College Scouting, Joe Hortiz, commented on Reid's long arms and mentioned his solid game against better competition, as evidenced by having a good bowl game vs. Georgia, playing against LB Justin Houston.