Share All sharing options for: With the 58th pick in the 2011 NFL Draft, the Baltimore Ravens select...

...wide receiver Torrey Smith, University of Maryland. Smith is sure to generate local interest as the former Terrapin brings both size and speed to the Baltimore Ravens after two excellent seasons just down I-95 from M&T Bank Stadium. The Ravens revealed that they had targeted Smith months ago after head coach John Harbaugh said he saw a story on Torrey and how difficult his life had been as a kid. Harbaugh said in the team's press conference immediately after the pick was made, "We need to find a way to make this guy a Raven."

Director of College Scouting Joe Hortiz said he told those guys (Ozzie, Harbaugh, DeCosta) this morning that he was predicting that Smith would fall to the 58th pick. The rest of the group said they were skeptical of that prediction. Hortiz said of Smith, "he's an explosive play-maker, bigger and faster. Today we got better." 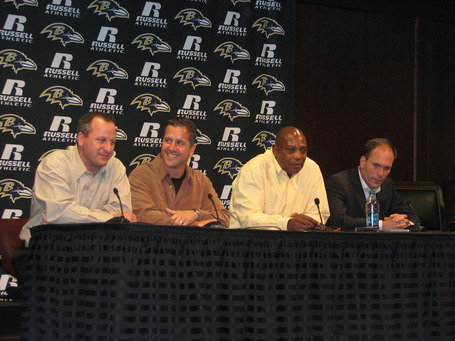 A lot of people have tried to compare Smith with former University of Maryland WR Darrius Heyward-Bey, but other than the same uniform they wore in college, the comparisons should stop there. Smith finished 3rd in school history with 152 receptions for 2,215 receiving yards and 19 touchdowns and his 67 reception, 1,055 receiving yards and 12 touchdowns are among the best in school history.

In addition to his on the field accomplishments, Torrey graduated with a degree in Criminology and a Criminal Justice major, the first member of his family to graduate from college.

More to follow on the newest member of the Baltimore Ravens.