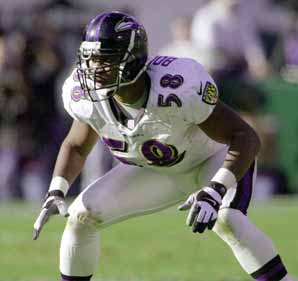 (Photo Credit: sportsillustrated.cnn.com)A lot of readers were surprised to see LB Adalius Thomas only ranked the 10th best draft pick in Baltimore Ravens history. They thought he was such a find in the 6th round of the 2000 NFL Draft that he should be higher ranked on this list. However, when the rest of the Top Ten come out, you will see that his placement is justifiably correct.

LB Peter Boulware was the Ravens first pick in the 1997 NFL Draft, fourth overall, out of Florida State University. Boulware was that great type of hybrid linebacker who could stop the run from the linebacker position but also put his hand in the dirt and make lives miserable for opposing quarterbacks. He recorded 70 sacks in his nine-year NFL career, with his best season being 2001 when he got to the quarterback a franchise record 15 times.

Together with Ray Lewis and Jamie Sharper, Boulware formed one of the best linebacker trios in NFL history, which showed when they dominated their opponents in the 2000 Super Bowl 35 winning season. He was NFL Defensive Rookie of the Year in 1997 and is still the Ravens all-time sack leader. Boulware was enshrined in the Ravens "Ring of Honor" in 2006 and remains one of the most popular players in team history.

Are You Smarter Than The Experts?
Correctly predict the first 32 picks of the 2011 NFL Draft and you’ll win $10,000,000!
BEST ROUND EVER IN PRIMETIME
Enter at facebook.com/BudLight
Here We Go