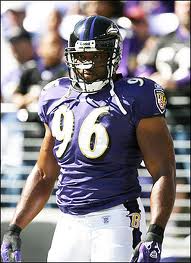 After counting down the Baltimore Ravens Top Ten Biggest Draft Busts in team history, we now turn to the other side of the coin with the best picks in the franchise's 15 years of existence. Starting off with #10, this list is a lot easier to find candidates, although once again, the exact order might stir debate. When the Ravens selected Adalius Thomas in the sixth round of the 2000 NFL Draft, they really didn't have high expectations for the Southern Mississippi defensive end.

Thomas barely played his rookie season, but began to get his chances, mostly on Special Teams by his second year. By the end of his third season with the team, he became a starter on both defense and continued impressing on the 'Suicide Squads.' For a big guy, Thomas played nearly every position on defense and was considered one of the most athletic players in the NFL.

Unfortunately, he became a free agent after a monster 2006 season, when he registered 106 tackles, 11 sacks and was named a first team All-Pro. He signed a big contract with the New England Patriots and went on to play three uninspiring seasons before being released prior to the 2010 season.

Many Ravens fans wanted to see the team re-sign Thomas, but not only did Baltimore pass on this chance, but so did the rest of the NFL and Thomas is effectively out of the NFL at this point.

Are You Smarter Than The Experts?
Correctly predict the first 32 picks of the 2011 NFL Draft and you’ll win $10,000,000!
BEST ROUND EVER IN PRIMETIME
Enter at facebook.com/BudLight
Here We Go