Share All sharing options for: Becoming A Baltimore Ravens Cheerleader

Brittany Walterhoefer has wanted to be a Baltimore Ravens cheerleader even since she used to go to the Ravens games with her father as a little girl. She told her father, "I want to be just like those women when I get older," yet little did she know her dream would end up becoming a reality.

Brittany tried out with almost 100 other hopefuls for the opportunity to cheer in front of 70,000 screaming Ravens fanatics at every home game, as well as making public appearances all year long throughout the area. Despite cheering in rec leagues and being captain of her high school cheerleading squad at Archbishop Spalding High School, as well as being on a local all-star squad, she still gets nervous in front of large audiences.

"Being able to perform in front of hundreds of people was very exciting and fun. Pretty much my whole life I have been performing on stage in front of people so it brought back pleasant memories. Although that does not mean I don't get nervous! It was very nerve-wracking knowing that I have one shot to make my dream a reality!"

Being a Ravens cheerleader takes more than just good looks, as these girls have to stay in tip top shape all the time in order to not only look beautiful, but to perform the gymnastic and acrobatic routines that the Ravens squad prides themselves on.

"To stay in 'cheerleading' shape I run one to three miles five days a week, either in the gym or in the Inner Harbor. Cardio is definitely a key component in order to be a cheerleader. I also do hot Bikram yoga, which is yoga in a hot 105 degree room. This builds core strength and helps flexibility."

Once the final tryout was over, which was held in downtown Baltimore at the Sheraton in front of over 600 fans, friends and family members, Brittany had to wait a bit before finding out she had made the squad. What was the wait to find out like?

"When the tryouts were over I was very nervous because there was a lot of competition. All of the women that tried out were very talented. I did my best and that's all I could do. When it was done it was in their hands to decide!"

Brittany felt welcomed to the cheerleading squad by the 'veteran' ladies and was glad to be able to solicit advice on specific skills, outfits and other topics. Now as one of them, she will able to finally fulfill that little girl's dream. 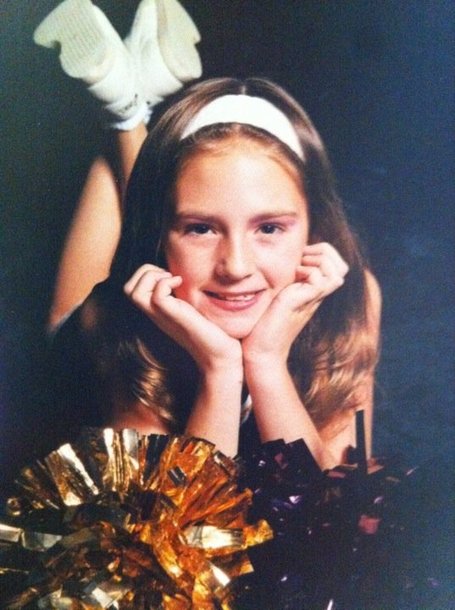 "I am ecstatic that I was selected to be a member of the squad. It all seems so surreal and it has definitely not set in yet that I am a Baltimore Ravens cheerleader. It is a dream come true and I am honored to be part of this squad."

Good luck Brittany and us fans look forward to seeing you on Sunday afternoons this fall!