Baltimore Charm Interview: Stacy Moon Is Shooting For The Stars

Share All sharing options for: Baltimore Charm Interview: Stacy Moon Is Shooting For The Stars

Ask the Lingerie Football League's Baltimore Charm's Stacy Moon if the team finished with only one win last year, how do they expect to do this season and you will hear nothing but positives.

"I am super excited to really put in a lot of work before the season starts and comeout this year on top. Last year, we had a lot of things to work through as a team and we're ready to bring that trophy to Baltimore! No one should underestimate the talent we have on the field. We're ready and we're going hard!"

Stacy first saw the Lingerie Football League when she went to a game in Philadelphia with her fiance. Right then, she said, "I'm trying out for the LFL next season!"

Stacy grew up playing soccer and softball but when she graduated high school, she focused on working and school. To fill her thirst for sports, she coached Travel Soccer for seven years, but obviously missed the thrill of competing. The next 6-7 months were spent studying football and practicing to get in shape to play the game, which is a lot more violent than most people think it is, despite the sexy uniforms.

"Definitely sexy uniforms. It is football, so you have to expect to get hit. Obviously, we go live during practice so before the season you somewhat get used to the hitting, but it doesn't compare to that first hit you get in a game. If you're trained properly on how to take a hit, which we are, then you're set. But players come at you hard, they wanna take your head off and make that hit. Just because it's women playing football doesn't mean that we don't hit hard. The hardest hit I received was during our game against Orlando. I was in at QB and hit my head on the ground. You get up and you're a little disoriented, but you gotta get up and move on to the next play."

Like the NFL game, there is a lot of trash talking ("It's part of the game") and the injuries mount up over the season ("all of my fingers have been jammed"), but the NFL doesn't have to worry about 'wardobe malfunctions' ("when you're playing tackle football in Lingerie, it's bound to happen").

It's obvious that Stacy loves her teammates and hesitates when asked who is the best player, hardest hitter, funniest and sexiest on the team.

"I am so proud to part of the Charm. We're a family on and off the field and I love every one of them. My vote for best player would go to RB Kacey White. She's absolutely amazing running the ball. Our hardest hitter would have to be Tiana Michaels. She's a beast on defense. The funniest definitely goes to Katie Sauter. She constantly keeps us all laughing. My sexiest teammate would have to be Kelly Campbell. She is a perfect representation for the Charm and is 110% about the team!" 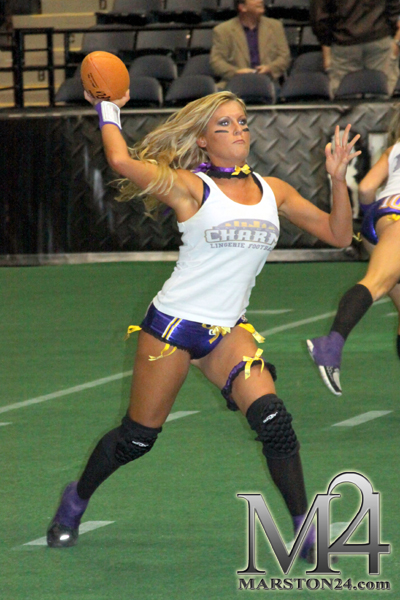 Finally, she has a message for all Baltimore Ravens fans who might want to see another type of football in the LFL:

"In Baltimore we have the most amazing fans. They show up ready to see women playing football and get hard hitting action. They love the LFL. We have heard nothing but positive feedback from our fans. Regardless of a win or a loss, they are there cheering us on as if they were cheering for the Ravens. The city of Baltimore loves their sports teams and it's very clear on game day when our stands are full."