The Baltimore Ravens selected their 2011 Cheerleading Squad last night in a standing-room-only public event attended by over 600 fans, family and media, including Baltimore Beatdown (someone has to do this!). Sixty ladies and 20 guys were selected after auditioning in various routines, dances and jumps at the Sheraton City Center in downtown Baltimore.

The judges included local media personalities from TV and radio, plus qualified instructors and beauty consultants, all around the emcee of the night, WBAL's Gerry Sandusky. Sandusky involved members of the audience in routines and seemed genuinely impressed that many of the ladies were teachers, scientists and held or were headed toward Masters Degrees from prestigious institutions such as Johns Hopkins University. 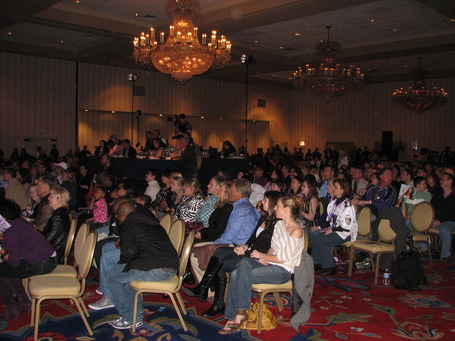 Families and friends of the contestants held up signs, banners and cheered wildly when their favorites came out on stage. The event lasted well over fur hours and the final selections must have been extremely difficult given the level of talent on stage. The Ravens have one of the more athletic dance squads in the NFL and the only male cheerleaders in the league. Lucky dudes!