The Baltimore Charm of the Lingerie Football League held open tryouts on Saturday, March 19th in Frederick, Maryland. According to the team 99 ladies showed up for the honor of showing what athletic and football skills they have in hopes of being able to don the lingerie and foam pads with the Baltimore Charm name on the front.

Unfortunately, it appears that 52 of them thought they just had to show up and look pretty to be selected to the team and that many girls dropped out before the practice ended, leaving 47 available to the coaching staff to pare down to the 35 that would be invited back next month. The team will end up with a roster of 20 players, of which 14 will be active for each game.

Charm coach Rick Reeder oversaw the tryouts, with his assistant coaches leading the specific drills. Strength and Conditioning Coach Shannon Wallace ran the girls through a bunch of wind-sprints to test their cardio and endurance abilities. Wallace, who also owns his own company, 368 Athletics, makes sure that the girls stay in shape before, during and after the season. He says there is no such thing as an "off-season," expecting the Charm players to work out with him once per week and 3-4 times on their own.

"We also have to take in consideration in having the right mindset to be a full contact football player. It is my job to make sure these talented women are as strong and fast as possible to give them that edge and confidence they need to be successful." 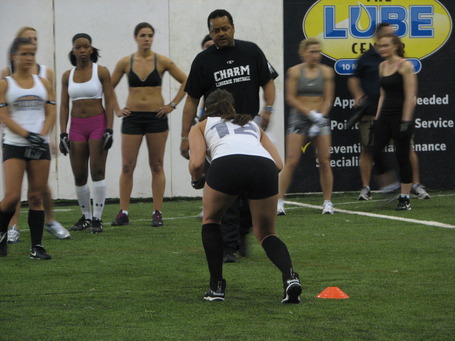 The other assistant coaches put the girls through a plethora of football-specific drills including back-peddling, quick slants & sideline pass patterns as well as the more physical one-on-one blocking and pass rush/tackling drills. The girls were fast, physical and not afraid to throw their bodies around the indoor sport-turf of the Frederick Indoor Sports Center. There's no question that many of the participants will wake up the next day with a bunch of bruises and turf-burns all over their sore bodies.

One hopeful I spoke to afterwards was Erin Douglas, who came all the way from New Jersey for the tryouts, thinking that while the LFL's Philadelphia Passion was much closer to her home, the Charm offered her a better chance at making the team due to this only being their second season in existence while the Passion played in the Lingerie Bowl this past season and has a veteran roster in comparison. 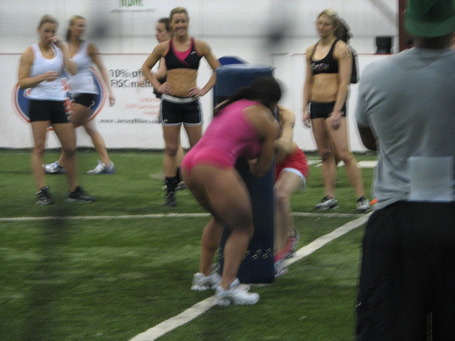 Douglas, who works out on her own on a regular basis found the conditioning drills a lot easier than the football drills and hopes to hear from the team when they inform the ladies on Monday whether or not they will be asked to return for another look and a chance at making the final roster. Erin is a high school guidance counselor with a Master's Degree in School Counseling but loves the physical challenge that football presents and is even willing to make the three hour drive from her home for practices and games.

Overall, there was a lot of talent on display Saturday and the team has indicated that it will have a bunch of new players on the field when they open the 2011 season later this summer.