Katie Sauter is a 'Baltimore Charm'

Share All sharing options for: Katie Sauter is a 'Baltimore Charm'

You might be thinking of something else when you look at Katie Sauter's photo, but this young lady can also be considered 'a wolf in sheep's clothing' when on the arena football field of the Lingerie Football League's Baltimore Charm. Sauter plays linebacker (and backup center) for the Charm, which are going into their second year in the LFL and are holding open tryouts for the team tomorrow (Saturday) in Frederick, Maryland.

Sauter got her start in the LFL after playing for the Baltimore Nighthawks of the Independent Women's Football League. Throughout her childhood and high school years, she was a cheerleader and dancer, but loved playing coed flag football, which brought her to the Nighthawks and eventually the Charm.

However, as in another player's previous interview, Katie knows all too well about the hard hitting and injuries that come with the surprisingly aggressive style of play in Lingerie Football:

"Throughout my season with the LFL I had countless bruises including a black eye and a fat lip however, the worst injury I endured was in the first game against the Philadelphia Passion with about 3minutes left in the game. I was making an across the field tackle on a run play and pulled the passion player on top of me and ended up breaking my collar bone, but I stopped the touchdown, lol. I remained in the game for two more plays which probably worsened my injury. After the game I went to the hospital, my collar bone was completely snapped. I ended up having surgery and now have some extra hardware, a plate and eight screws to be exact. "

(Read more on Katie Sauter of the Lingerie Football League's Baltimore Charm, including more photos after the 'Jump')

According to Sauter, the "sexiness" of the LFL comes at a high price for many of the girls, who tolerate the wardrobe and lack of protection for the thrill of playing a game that they take seriously and love:

"The uniforms are definitely meant to be sexy but unfortunately in order to achieve the level of sexiness the LFL demands there has to be a loss somewhere, and that loss comes in the form of minimally protective, foam shoulder pads. The game pads are very flimsy and do very little to protect against actual football hits. I learned firsthand just how little the pads protect when I made a tackle and my pads, which are hooked with elastic, Velcro straps, came up, exposing my collar bone leading to the break. As a defensive player who was injured in the first game, I don't have a hard hit I received to talk about. " 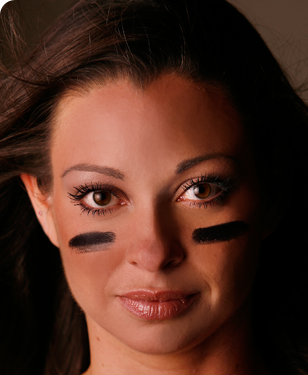 Like other LFL players, Katie want fans to know this game is more than hot girls running around in skimpy outfits, as they work out year round and study the game as well: 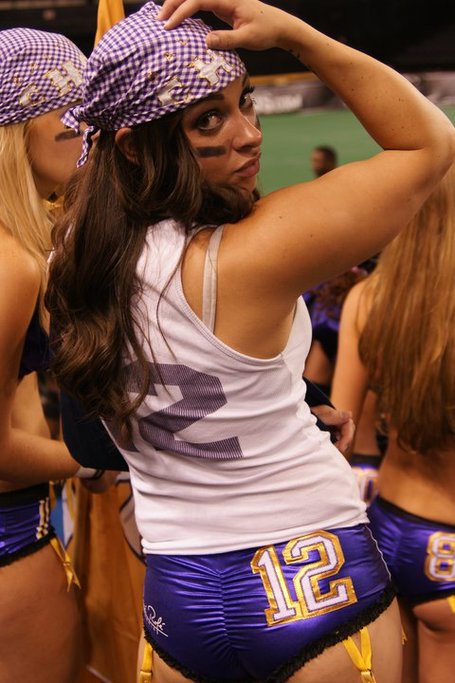 Camaraderie on the Charm is no different than what is seen in pro football, both on the field and in the locker room. Sauter talks about her teammates, their skill sets and personalities when asked who is the best player, hardest hitter, funniest, sexiest teammate on the Charm:

"Hmmm me for all four? Just kidding! I don't know who the best player is, sorry to sound diplomatic here, but all of the Charm players had their strengths and areas they excelled at on the field. I feel that the players on the Charm were true athletes, most of which came from great athletic backgrounds and had excelled at their respective sports at a high level. Tiana is probably one of the sexiest Charm players, her muscle tone and body is flawless and she knows I am envious of her junk in the trunk! The funniest Charm players might have to be Morgan and Chantelle. Morgan is such a goof ball and her one-liners are hilarious! Chantelle has a drier sense of humor but her level of sarcasm is hard to match! The hardest hitter? Teresa is a little mack truck coming through….she lays the wood! Her and I would have been a hell of a pair of linebackers if I had not been injured, we were getting it in and putting in the work at practice, laying out our own teammates!" 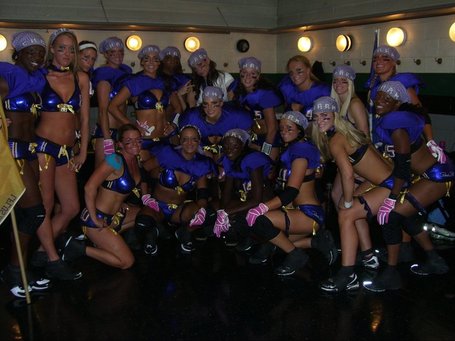 As for as the outlook for the Charm's second season in the LFL after winning only one game in 2010, Katie Sauter is optimistic and sees her team improving by leaps and bounds:

"The 2011 season begins in the fall….i feel that the Charm team, players and coaches alike, have learned a lot from our first season as an expansion team. We are now more familiar with the LFL rules, or lack thereof, as well as penalties and lack of enforcement. We are aware now of the type of game we can play and the kind of game we need to play in order to become the LFL Championship team. We are already putting in the work off-season in order to better ourselves and have a winning season in 2011."