Looks Like There Will Be Football On Sundays After All 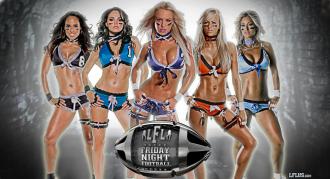 Whether or not the labor dispute between the NFL owners and players is settled in time for a normal 2011 season, it still looks like one way or another, there will be football on Sundays this fall. Hopefully, all this means is that the two sides will reach an agreement to get this thing over and done with so the schedule is not disrupted in any way. That, of course, would be the best way to ensure that we can still trudge to the sofa every Sunday afternoon, plop down and watch us some football. However, it appears that regardless of the two sides reaching an agreement, there will still be football on Sundays this fall even if the NFL is not the football we're talking about.

Are you ready for this? The Lingerie Football League (LFL) has announced that if the NFL is unable to reach an agreement and the 2011 season is either postponed or cancelled, they are prepared to move their games from Friday evenings to Sunday afternoons. All together now,...whoop whoop!

Not only is the LFL returning for another season of ....football, they are actually expanding the league with three new teams. The Baltimore Charm will be going into their sophomore season and with their rookie year a learning experience, feel they have every reason to believe they can compete for a Lingerie Bowl berth and a league title.

It's better than no football on Sundays and it's really not that difficult to watch either. Trust me.