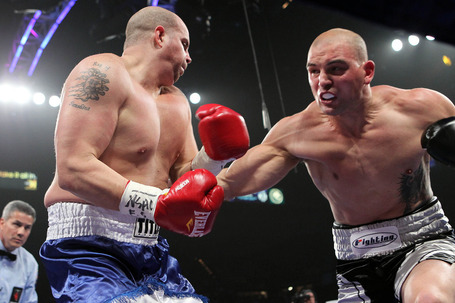 (Photo:Tom Casino/SHOWTIME)A day after Baltimore Ravens' safety Tom Zbikowski's first round TKO over Richard Bryant in his second professional boxing match, more information about the fight is being released, including the date you can watch this fight along with the full fight card, for free on Showtime.

Tommy Z, as is his current ring name until someone gives him a better boxing nickname, unleashed a flurry of body shots that put Bryant down for the count in what appeared to be a delayed reaction. Bryant actually threw a couple of punches after the big blow before finally crumpling to the canvas in agony. Zbi took a few decent shots to the head, proving he can take it as well as dish it out.

Zbikowski (2-0, 2 KO), of Chicago, Ill., didn’t waste any time racking up his second career win after a long hiatus from the ring. The former Notre Dame standout, with the uncertainty of a 2011 NFL season looming, returned to his first love of boxing to score a first-round TKO over Bryant in a heavyweight bout scheduled for four rounds. At the fight’s outset, the fighters got tied up and Zbikowski utilized some football skill by throwing Bryant (1-3, 1 KO), London, Ky., to the canvas. After the action resumed, Zbikowski landed a left hook to the body that knocked the wind out of Bryant, causing him to fall to the ground and the fight to come an end via technical knockout at 1:45 in the first round.

The Cotto-Mayorga fight will be rebroadcast on Saturday, March 19 at 10 p.m. ET/PT on SHOWTIME.