After getting into a verbal altercation about who would win a boxing match between them, the Baltimore Ravens safety, Tom Zbikowski, and the Cincinnati Bengals wide receiver, Chad Ochocinco, sat down together to discuss the possibility of this fight becoming a reality. Zbikowski is fighting this Saturday night in Las Vegas on the undercard of the big Miguel Cotto-Ricardo Mayorga fight, and Ochocinco seems to think that if he was in the ring with Zbi, he would beat him.

That prompted Tommy to issue the challenge to Chad and the verbal jabs began to fly. Most people, even Cincinnati fans, seem to think that while Ochocinco reportedly has been using boxing as part of his training regimen, Zbikowski's 90 amateur fights in Golden Gloves competition, as well as his one professional win, gives him a huge advantage in the ring. Not to mention that at 215 pounds, the 25 year old Raven has a distinct advantage over the 192 pound 33 year old Bengal.

Zbikowski had a lot to say at the weigh-in for his fight at the MGM Grand vs. Richard Bryant

"It’s an honor to be back. It’s an honor to be fighting for Top Rank and Mr. Arum. Everyone seems to be thanking who they think is important so I’d like to thank myself because, at the end of the day, I’m the one getting punched in the face and I’m the one doing the training. So hopefully, you’ll enjoy what you see on Saturday night."


(Click on the 'Jump' to see more about the interview between Zbikowski and Ochocinco, as well as the information about this Saturday's fight in Las Vegas.)

Tom Zbikowski and Chad Ochocinco got together for an interview and talk about a potential fight between the two, whether or not their respective teams have an issue with them fighting, and where they think the fight could take place. 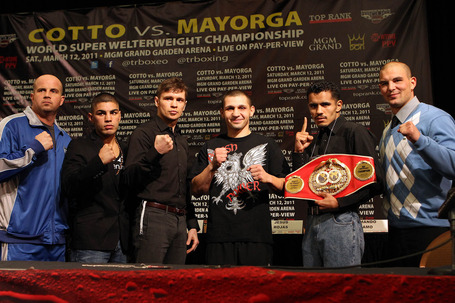 Tommy Z: "I’d Like to Thank MYSELF… Because I’m the One Getting Punched in the Face"

NEW YORK (March 10, 2011) – Although all the participants at today’s RELENTLESS: Cotto vs. Mayorga undercard press conference managed to keep their shirts on, the fighters offered up some interesting commentary in anticipation of the March 12 SHOWTIME PPV event on Saturday at 9 p.m. ET/6 p.m. PT.

Also on hand Thursday morning for a media roundtable discussion were the trainers of Cotto and Mayorga, Emmanuel Steward and Al Bonanni, who made some of the day’s most intriguing assertions and recollections. See below for highlights.

Yuri Foreman:
"I’m really tired about the questions about my knee. My knee has been fixed. It’s in my past. Now I’m concentrating on the future."

"Pawel Wolak definitely lives up to his ring name ‘Raging Bull.’ That’s what he brings. Three and half thousand years ago when the Jews finally came out of Egypt, they experienced great spiritual events: splitting of the sea, they heard God speaking. However, after a few weeks, they built a golden calf and they’ve been punished. Obviously, raging bull… golden calf… it’s not really all that great for the Jews. I’ve been training very well, very hard, like always. Hopefully, I’m going to be –  on Saturday – a matador."

Pawel Wolak:
"I’m very excited and very happy. This is a huge challenge but I’m up for it because I had a great camp. This is a huge shot for me and my family. I’ve got people coming for this fight. I’m ready. The bigger the challenge, I get up for it. My conditioning is ridiculous. I‘m definitely going to fight hard. Yuri, thanks for accepting the fight. Listen, that’s it. I’m just happy. I’m happy to be here. I want to fight. I’m in Vegas. I love it!"

Tommy Zbikowski, Baltimore Ravens Safety:
"It’s an honor to be back. It’s an honor to be fighting for Top Rank and Mr. Arum. Everyone seems to be thanking who they think is important so I’d like to thank myself because, at the end of the day, I’m the one getting punched in the face and I’m the one doing the training. So hopefully, you’ll enjoy what you see on Saturday night."

Richard Bryant:
"I want to thank God for giving me the ability to do something that I really love. This is a dream to be able to be able to box at MGM. I know Tommy boxed his first fight at MSG so he’s kind of used to this. He’s a world class athlete. I give him all the respect in the world for all he’s done but I didn’t come here to lose. At the end of the day, I hope we don’t leave it up to the judges."

Miguel Vazquez:
"This is a big fight card that I’m excited to be a part of. I’m ready and prepared to defend my world title and show everybody that I’m the best. I know my opponent is tough and this is going to be a tough fight. It won’t be easy, by no means. I’m going to be victorious by the end."

Lenny Zappavigna:
"I’m really looking forward to having the shot to fight for the IBF world title. This is a dream for me. I’ve trained really hard. I’m 100 percent prepared. I’m fit."

Bonanni:
Bonanni has trained Mayorga on and off for years. After experiencing a few too many antics in camp, Bonanni recalled leaving…
"I always had enough money to walk away from aggravation and I always had a bad enough temper to shoot somebody…so I left. Mayorga is tough."

The fight week media week concludes tomorrow with the official weigh-in at the MGM Grand Garden Arena in Las Vegas. The weigh-in will be broadcast live on SHOWTIME EXTREME at 6 p.m. ET/PT (delayed on the West Coast).  Ines Sainz and Jim Hill will host the half-hour program that will also include fighter interviews. The telecast will be available in High Definition and produced by Top Rank. In addition to the broadcast, a live stream of the weigh-in will be available at sports.sho.com and www.toprank.com/TRLivestream.
Cotto vs. Mayorga will be promoted by Top Rank, in association with Cotto Promotions, Don King Productions, Tecate and MGM Grand.
The Cotto vs. Mayorga pay-per-view telecast, beginning at 9 p.m. ET/6 p.m. PT, has a suggested retail price of $49.95. It will be produced and distributed live by SHOWTIME PPV. The telecast will be available in HD-TV for those viewers who can receive HD.  For Cotto vs. Mayorga fight week updates, log on to www.sports.SHO.com or www.toprank.com