What Will the "Ravens-Indy" Scoreboard Say Sunday?

Share All sharing options for: What Will the "Ravens-Indy" Scoreboard Say Sunday?

A long, long, long time ago, the Indianapolis Colts were the Baltimore Colts. Some people may not know this, so it must be repeated each time the Baltimore Ravens play the Indianapolis Colts. The old Baltimore Colts were "stolen" from the city of and fans who had cherished them since legendary QB Johnny Unitas led the team to victory over the New York Giants in the 1958 NFL Championship Game, a pre-curser to the Super Bowl. The Colts beat the Giants, 23-17 in Sudden Death, in what has been called, "The Great Game Ever Played," and many credit this specific game for putting pro football on the national map where it remains today.

However, ever since Baltimore got the Ravens 1996, the bad blood has not simmered, at least from Baltimore's perspective. Despite winning the 2001 Super Bowl, the city has never forgiven Indianapolis for taking the name, colors, uniforms and record of the old Baltimore Colts. To that end, whenever they play in Baltimore, the stadium scoreboard refuses to acknowledge the Colts name, instead listing the visitor as "Indy." On the other hand, whenever other teams come to Baltimore, their team name (Steelers, Bengals, Browns) are listed, not the city's name. 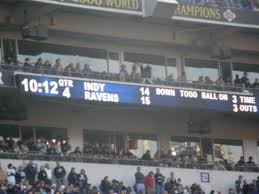 At what point will Baltimore, its fans, young and especially old, let it go? Perhaps never, as it is a very personal decision and while the Ravens are one of the better teams, year-after-year, the Colts have been just as good, if not better for the past decade. On top of that, it always seems that Indy always beats the Ravens, as they have had one of the best quarterbacks in NFL history in Peyton Manning to find a way to beat us. Surprisingly, many Ravens and old Colts fans freely admit how much Manning reminds us of Johnny Unitas and Peyton has even honored Unitas by wearing those classic high-top black cleats that Johnny U always wore.

Indy won't have Manning to help them end their 2011 win-less streak this weekend and the Ravens are a two-touchdown favorite and should easily put a Baltimore "beatdown" on the "new" Colts. However, the interesting thing to notice for all in attendance is what the scoreboard will say: Will it be 'Indy" or the "Colts?"