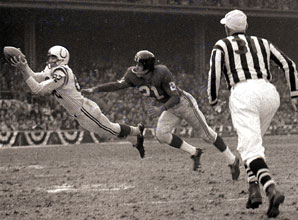 Berry, who played his entire 13-year career with the Colts and won two NFL Championships with the team, will participate in the Vince Lombardi Trophy ceremony at the conclusion of Super Bowl XLVI. Berry will carry the trophy to the stage and deliver it to Commissioner ROGER GOODELL who will present it to the Super Bowl champion. The ceremony will be televised live by NBC at Lucas Oil Stadium in Indianapolis.

Watched by more than 162 million viewers in the U.S. last year, the Super Bowl is annually the nation’s highest-rated TV program.

Berry, who was inducted into the Pro Football Hall of Fame in 1973, joins ROGER STAUBACH, LEN DAWSON, JOE NAMATH, DOUG WILLIAMS, DON SHULA andBART STARR as legends saluted in previous Lombardi Trophy ceremonies. The ceremony was expanded in 2006 to include a great from a prior Super Bowl and features the "Lombardi Theme," special music scored by NFL Films.

A 20th-round draft choice out of Southern Methodist in 1954, Berry’s relentless work ethic morphed him from a player fighting for a roster spot into a record-setting receiver. His 631 career receptions, 9,275 receiving yards and 68 touchdowns caught were at the time the most in NFL history. His signature performance came in the 1958 NFL Championship Game, widely deemed "The Greatest Game Ever Played." Berry tallied 178 yards and a touchdown on an NFL-record 12 receptions as the Colts overcame the New York Giants, 23-17, in overtime. Berry and the Colts also won the NFL Championship in 1959 and then went on to appear again in the championship game in 1964.

Berry retired from the NFL in 1967 and ventured into coaching. After holding assistant positions with both the Dallas Cowboys and New England Patriots, he was hired as the Patriots’ head coach in 1984. He led New England to its first Super Bowl berth in the 1985 season. He would go on to serve in assistant roles with the Detroit Lions and Denver Broncos in the early 1990s. He currently lives in Murfreesboro, Tennessee.