Share All sharing options for: Win A Samsung Galaxy Tab On Baltimore Beatdown

The Baltimore Ravens are playing the San Diego Chargers this Sunday at what is being temporarily named Snapdragon Stadium. For an eleven day period starting with Sunday's game, what has been formerly called Qualcomm Stadium will be renamed Snapdragon Stadium, and all signage and promotion will be changed to reflect the new name.

In recognition of this event, they have authorized Baltimore Beatdown to hold a contest, with the winner t receive a brand new Samsung Galaxy Tab (8.9). The contest will be to guess the total points scored by both the Ravens and Chargers in Sunday night's game. Closest to the exact total will win the give-a-way. In the event of a tie, we will be be asking for your total on the Ravens game on Christmas Eve vs. the Cleveland Browns as well. The winner will not be announced until the eleven-day naming rights expire on December 28th.

Therefore, you must post your game totals for both the Ravens-Chargers and Ravens-Browns games on this story before 8pm on Sunday night. Any entries with a time post later than 8pm (ET) will not be valid. Remember to post the total point by both team in both games in the same comment. Only one entry per Baltimore Beatdown member.

(For more info on Snapdragon Stadium, click on the 'Jump' to see the official Press Release) 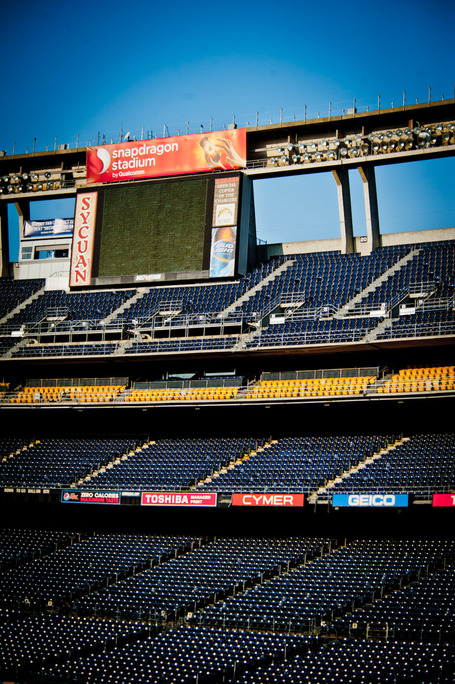 For an 11-day period starting with the NFL’s Dec. 18, Ravens at Chargers game, and extending through both the Bridgepoint Education Holiday and San Diego County Credit Union Poinsettia college bowl games, Qualcomm, which has held the naming rights on the Mission Valley stadium since 1997, is temporarily changing their name to Snapdragon Stadium. This is the first time that a sponsor has temporarily renamed and transformed a stadium to showcase one of their brands. For the short period of time, all Qualcomm-branded assets at The Q, including the scoreboards and exterior signs, will be wrapped with Snapdragon branding.

What is Snapdragon you might ask? Snapdragon processors by Qualcomm are all-in-one mobile processors also known as the "heart" of your mobile device. Even though you may not be able to see it, Snapdragon is hard at work in some of the best smartphones and tablets on the market, including HTC and Samsung products. Snapdragon technology efficiently powers every function of your smartphone or tablet, from simply turning it on to advanced features such as gaming and 3D multimedia. With more than 350 leading device manufacturers and carriers choosing Snapdragon to power their devices… maybe its time we all start to ask for it by name. Technology aside, Snapdragon is pretty fun to say.