Share All sharing options for: Steelers James Harrison Is One Fuggly Dude 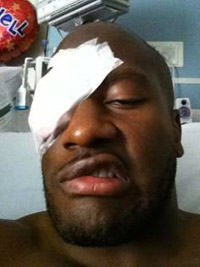 After undergoing surgery to repair a broken right eye socket, Pittsburgh Steelers linebacker James Harrison is expected to miss a few weeks, if not more. That could even put his status for the Steelers rematch with the Baltimore Ravens in jeopardy, which of course would sadly disappoint more than a few Ravens fans (not!).

In the meantime, Harrison tweeted a self image of himself after surgery, with an eye patch covering the injured socket and a swollen face to match. As to the photo, he proclaimed on his Twitter account, "I feel like a pirate."

NFL.com posted the photo above of his tweeted self-portrait, along with some more comments and if you look inthe background of the photo, you can see a red balloon, obviously sent as get well wishes from an unnamed source. The story wonders who sent it, saying,

"No official word on who sent it -- probably not Joe Flacco."