The Baltimore Ravens went out of their way to show support of Breast Cancer Awareness Month, as they decked out the stadium, players, coaches, cheerleaders and even fans in pink for last night's prime-time TV game when they put a serious 34-17 hurting on the New York Jets. SB Nation also did the same for Baltimore Beatdown Sunday and will accent all the SB Nation NFL sites today in the same manner.

From pins, ribbons, gloves, cleats, skullcaps and more, players on both teams donned the color pink to show their support. Most of the game worn stuff will be up for auction on NFL.com. However, perhaps most impressive was the National Anthem, sung by country music superstar Martina McBride, who was flanked by fifty breast cancer survivors and those undergoing treatment, while the entire side of the stadium behind he held up pink and while signs, showing the breats cancer ribbons and slogan, "A Crucial Catch."

It was a great production for the stadium, as the signs with instructions, were taped to the seats ahead of the opening of the stadium and cheerleaders held up signs telling the fans when to hold up theirs. Our seats were part of the production, so it was nice to take part and until this morning, I didn't notice exactly what it looked like from overhead. Impressive and proud to be representing the city of Baltimore and our Ravens last night. 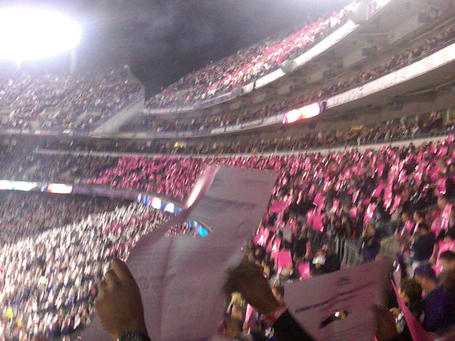