Ravens To Give Jets 'Hard Knocks'

Share All sharing options for: Ravens To Give Jets 'Hard Knocks'

When the New York Jets entertained us on HBO's 'Hard Knocks,' they boasted about how they were going to win the Super Bowl. They've came real close the past two years, advancing to the AFC Championship Game in both of head coach Rex Ryan's two years since he left the Baltimore Ravens. However, he has not beaten his former team in either the regular or exhibition season. That won't change after this evening when the Jets come to Baltimore on Sunday Night Football In America.

Baltimore's M&T Bank Stadium will be rocking as loud as it was when the Ravens dismantled the Pittsburgh Steelers to open the 2011 regular season with a 35-7 victory. Now the Ravens have no intention of following up on that great win with another statement that they belong in the discussion as one of the top teams in the NFL. A big win on national TV will go a long way to proving that the Ravens are a lot more like the team that embarrassed the Steelers than the one that embarrassed themselves in their flat 26-13 loss to the Tennessee Titans the following week.

The Jets are an angry bunch and need a big win to wash the bad taste of the tough loss they suffered to the Oakland Raiders last Sunday and will be planning on bouncing back with a huge victory to keep pace with the New England Patriots and the surprising Buffalo Bills in the AFC East. Unfortunately for Gang Green, that is just not going to happen, at least tonight.

The Ravens have been able to put points on the board in their two wins, and their new aggressive passing attack in the main reason why. QB Joe Flacco has thrown three TD passes in each of the Ravens victories and the emergence of rookie WR Torrey Smith opens a whole new avenue for the offense. In a domino effect, Smith three-TD performance last week takes some of the attention off of WR Anquan Boldin, which in turn opens up the middle for TE Ed Dickson and puts RB Ray Rice one-on-one with a slower linebacker.

At the same time, the opposition's secondary can no longer creep up to the line of scrimmage and stack the box, daring the Ravens to beat them through the air, which of course is now the real threat that it hasn't been in the past. The offense's balance now has been made possible with the solid play from the re-vamped offensive line that, despite injuries and re-shuffling, has protected Flacco well and opened huge holes for the running game.

Defensively, while the Ravens secondary has been riddled with injuries since game one, the bend-but-don't -break mentality has worked well, based on the fact that while the opposing quarterbacks have thrown for a lot of yardage, the points have been hard to come by. With the possibility of Jets center Nick Mangold missing the game and replaced by a rookie, the Ravens defensive line is drooling with the improved chance to shut down the run game and pin their ears back in anticipation of chasing Jets QB Mark Sanchez all over the field.

The Jets are more of a passing team and with solid wide receivers in Santonio Holmes, Plaxico Burress and tight end Dustin Keller, could pose a threat to the Ravens depleted secondary. However, without protection, Sanchez will not be able to carry the Jets on his young, GQ-featured shoulders. 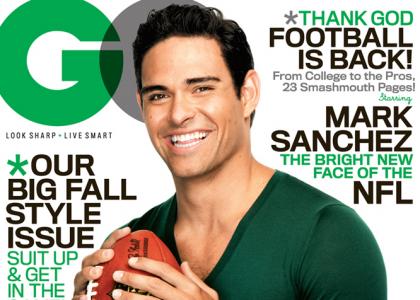 Expect the Ravens to shut down the Jets rn game and unleash the hunters to not give Sanchize time to find his receivers. Besides, Dustin Keller should probably remember Ray Lewis from last year's face-to-face meeting.

Offensively, the Ravens plan to exploit the Jets run defense, which was gashed repeatedly by the Raiders and then go over the top in mismatches against guys not named Darrelle Revis. Expect big games from Ray Rice, Ed Dickson and of course Joe Flacco, as Baltimore goes into their well-deserved and much-needed Bye week with a 3-1 record, while New York limps him with a two-game losing streak in third place in the AFC East.